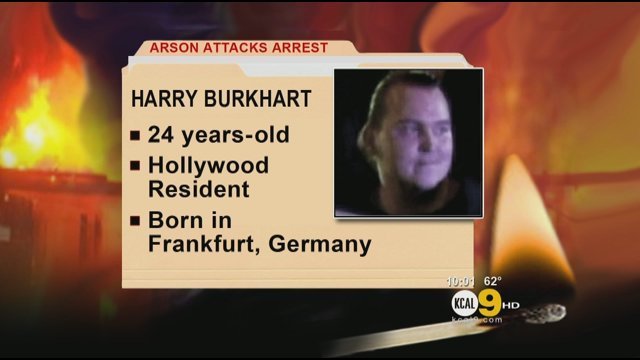 I’ll admit that I half expected the Los Angeles arsonist to be named Mohammed, because of Europe’s recent history of Muslim youth burning down cars and buildings, sometimes for weeks on end, like the 2005 France civil unrest.

Below, over $3 million in damage was caused by 54 fires in four days of intense arson attacks in Los Angeles. 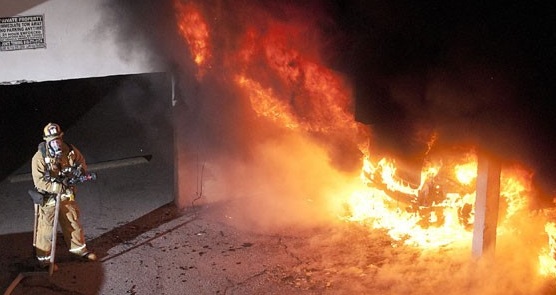 The arrested guy’s name is Harry Burkhart, so no obvious line to Islam there. However, the accused arsonist is German and said he “hates America,” perhaps because his mother was facing deportation. So immigration appears to be a motivator, in a bad way.

In addition, Burkhart’s travel documents indicated he travelled to Chechnya, home of many hostile Muslims and not a groovy tourist spot. Chechens have been in a sort of terror war with Russia, with one of the worst atrocities being the 2004 murder of more than 300 schoolchildren in Beslan.

So there may be an Islamic connection after all. Stay tuned.

Weeks before a string of arson fires began, the suspect in the case went on an anti-American rant at an immigration court hearing in Los Angeles, authorities say.

According to law enforcement sources, Harry Burkhart was angry that the federal government was trying to deport his mother. At the hearing, he erupted in an angry tirade, spewing anti-American statements.

He had to be escorted from the court, one source said.

When the LAPD released a photo of a “person of interest” in the fires on Sunday, an official involved in the case recognized him. LAPD Chief Charlie Beck said that was the big break that led to Burkhart’s arrest.

The suspected arsonist is a 24-year-old German national who carried travel papers from Chechnya. He had spent time in Germany, they said, but had lived in Southern California for the last several years.

Police searched a Sunset Boulevard home Monday evening in connection with the case.

Witnesses said the search took place in the 7200 block of West Sunset Boulevard in a second-story apartment above a hair salon and optical shop where Burkhart is believed to have lived. Pieces of yellow police tape remained outside the building late Monday.

Shlomo Elady, a 44-year-old hairstylist, works on the first floor of the building at Le Figaro Hairstyling. He said he had cut Burkhart’s hair for more than a year and that he saw Burkhart leave the building each morning and return late at night. He did not know if he had a job.

“I cut his hair just a week and a half ago,” Elady said. “I’m in shock. He’s my client. I never saw any sign of trouble.”

A reserve sheriff’s deputy arrested Burkhart early Monday based on a description of the suspect’s vehicle gleaned from the federal official’s tip.

TV footage showed Burkhart after his arrest, dressed in black, wearing his hair in a ponytail and grinning.??Investigators are trying to determine if other people were involved in the arson rampage that had parts of the city on edge for four days.??Since Friday morning, at least 50 fires were set, mostly in the Hollywood area, but also on the Westside and in the San Fernando Valley. Many of the blazes were in carports and driveways, and spread to apartment buildings and homes.