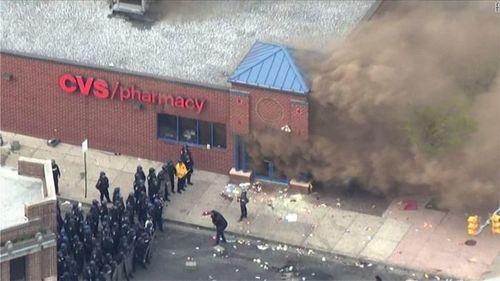 Gentrifiers in Baltimore Terrified by Eye of Soros Aftermath

City residents, angry and frightened over rising homicides, accuse the police of standing down and ignoring crime.

… Six months after a 25-year-old black man, Freddie Gray, died after suffering a spinal cord injury in police custody, setting off the worst riots here since the 1968 assassination of the Rev. Dr. Martin Luther King Jr., this waterfront city is fragile and on edge. Baltimore is in search of new leadership and unsure of its future, as it braces for the trials of six police officers implicated in Mr. Gray’s death.

The homicide rate is soaring. Baltimore, with roughly 623,000 people, has had 270 homicides this year, almost as many as in New York, with 281 in a city of about 8.4 million. Nearly 100 people have been murdered in Baltimore in the last three months alone, eight in the last week. Residents, angry and frightened, accuse the police of standing down and ignoring crime. …

The unrest thrust those two Baltimores together, forcing painful conversations about the city’s racial divide. But in a city where blacks outnumber whites two to one, it has also been a reminder that black leadership, exemplified by Ms. Rawlings-Blake, is not a guarantee that government can manage toxic collisions of race and policing any better than white leadership has in places like Ferguson, Mo. …

Like most homicides in Baltimore, Mr. Butler’s is unsolved; as more people are being killed here, fewer killers are being caught. The homicide “clearance rate,” the percentage of killings solved by the police, was 45.5 percent last year; today it is 32.8 percent, the police said. Nationally, the rate was 64 percent in 2013, the most recent year for which the Justice Department has statistics.

In response, the Rawlings-Blake administration has created a “war room” — a controversial term here, given tensions between the police and residents — where detectives, prosecutors and federal agents trace weapons and track down criminals. Mr. Davis, the police commissioner, says the team has identified 238 “gun toters,” all suspected of homicides or nonfatal shootings. None are behind bars.

Ta-Nehisi Coates must be pleased. Except some of these guys are no doubt the same thugs who made dweeby TNC’s childhood in Baltimore terrifying. How can we reconcile this? I know! Because racism.

On a rainy summer night, Ms. Hawks could be found in a cavernous auditorium, filled with mostly white residents who had come to unload their grievances on Ms. Rawlings-Blake, at a community forum on crime, one of a series that the mayor has convened.

One woman complained about “blatantly open drug deals and prostitution” in her neighborhood, saying she no longer felt safe, “even during the day.” A man said that when he walks outside “at 10:30 at night, and I don’t see a single police person, it freaks me out.” …

“The lawless are becoming a protected class, and hard-working people are losing everything,” she went on, pleading with Ms. Rawlings-Blake to “get on the national media” and turn Baltimore’s “decimated” reputation around.

While investment is booming in some parts of Baltimore, tourism, critical to the local economy — and especially to Fell’s Point — declined during the unrest, and has yet to recover. Hotel occupancy is down roughly 9 percent since April; ticket sales at city museums and attractions have dropped. Anirban Basu, the chairman of the Maryland Economic Development Commission, warned that the “reputational impact” could last for years.

The Fell’s Point sidewalks were nearly empty on a recent Friday afternoon, save for some homeless people wandering the brick-paved town square. Claudia Towles, who owns a high-end toy store, Amuse, looked out her front window, past a display of brightly colored scooters, and frowned at the sight of parking spots on the street.

Across the street, at “The Horse You Came In On Saloon,” which claims to have stayed open through Prohibition, and to have served Edgar Allan Poe his last drink, the owner, Eric Mathias, estimated that he lost $50,000 in sales during the five-day curfew imposed during the unrest, and said weekend “day-trippers” he depends on have not returned. He longed for a mayor like Rudolph W. Giuliani of New York, someone who would get tough on crime