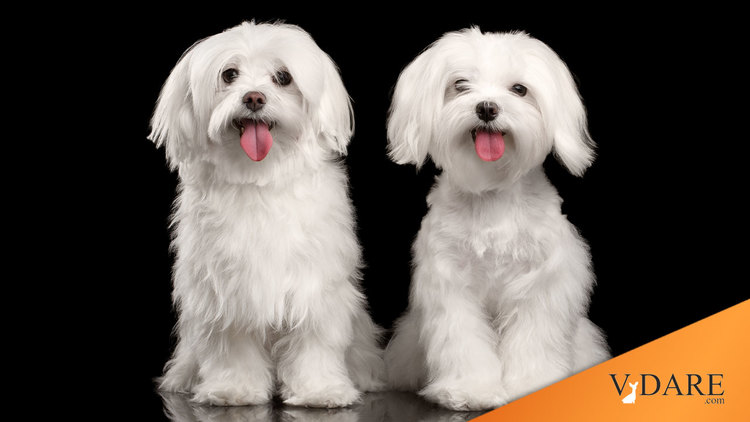 Genetics: The Maltese Vs. The Default Dog How Old Is the Maltese, Really?

Many dog fanciers like to trace their favorite breed to antiquity, but the researchers who study the modern and ancient DNA of dogs have a different perspective.

“The tiny Maltese,” the American Kennel Club tells us, “has been sitting in the lap of luxury since the Bible was a work in progress.”

… True, Aristotle did praise the proportions of a kind of lap dog described as a Melitaean dog. Scholars debate whether this meant the dog came from Malta, or another island called Melite or Miljet, or maybe a town in Sicily. It was a long time ago, after all. Aristotle also compared the dog to a marten, a member of the weasel family, perhaps because of its size. And yes, the Romans absolutely loved these dogs.

So there is little doubt that there were little white lap dogs 2,000 years ago. The question is whether the modern Maltese breed is directly descended from the pets Romans scratched behind the ears.

So the question would be: did Maltese-style lapdogs had a certain amount of genetic continuity over the last 2400 years? Or, during the Dark Ages, did Mediterraneans let all their dogs mix promiscuously back into the default dog like you see in the Third World today: about 35 pounds, short yellowish fur, and an intelligent-looking pointed face?

Here’s a quasi-Maltese little lap dog from a 1460 Italian painting. So, presumably, lapdogs were being bred again at least by the Renaissance.

Dog-breeding seems to me like the kind of thing that barbarian invaders would have invested in and kept going through the Dark Ages, especially distinct types of hunting dogs, but possibly also cute little dogs for milady.

On the other hand, it’s probably not hugely hard to revive a wide variety of breeds from Default Dogs in, say, 100 years.

Digging up skeletons of old time dogs would allow their DNA to be sequenced.

It’s not just Maltese fanciers who are interested in their breed’s ancient roots. Basenjis, Pomeranians, Samoyeds, Salukis, terriers and others have supporters who want to trace the breeds back to ancient times. …

“The Pharaoh hound people were the first to approach me and ask that question,” she recalled.

“Do our dogs really date back to the time of the Pharaoh?” the breeders asked. Unfortunately not. That breed, Dr. Ostrander said, was “totally recreated by mixing and matching existing breeds” after World War II.

Other breeds were established by picking an existing group of dogs in the Victorian era and classifying them as a breed with a definition that meant only dogs whose names were in a registry or whose ancestors could be identified as being in that registry, fit the breed. And 2,000 years ago, she said, “the concept of a breed did not exist.”

Ancient dog breeders no doubt bred for functionality. Whether they were as obsessed with standardized looks as 21st century breeders is a mystery.

In horse racing, the Thoroughbred has been a completely closed breed for over a century. You can’t enter a horse in the Kentucky Derby that isn’t descended on all sides from horses in the 19th Century British and/or American Thoroughbred pedigree book.

In general, anything involving family trees gets supercomplicated surprisingly fast: e.g., all sexually reproducing animals have 1024 slots in their family tree just ten generations ago. So, rule making organizations are tempted to come up with strict rules, such as the one drop rule, to simplify things.

Nor does DNA show any direct line from ancient to modern Maltese. …

The genomes of the Maltese, the havanese, the bichon and the Bolognese (the dog not the sauce) are all related, Dr. Parker said. The breeds may have split from a common ancestor a few hundred years ago and that common ancestor may no longer exist, or it might have been closer to one of the breeds than the others. But there’s no DNA line to be traced to the time of Aristotle.

We have evidence that Mediterranean lapdogs have been around at least intermittently for a long time. Have they been around continuously for all that time or did they get reshuffled completely back into the Default Dog and have to be recreated?