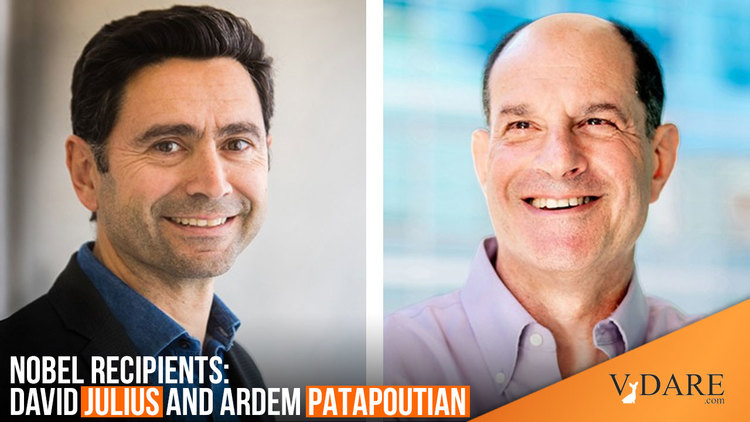 One test of whether our culture possesses any will to resist Wokeness are the three hard science (Medicine, Chemistry, and Physics) Nobel Prizes awarded each October. Unlike the disgraceful MacArthur Genius grants last week (e.g., Dr. Prof. Ibram X. Kendi), the hard science Nobels have stayed mostly serious and scientifically respectable through 2020. After all, the Nobels have, arguably, the world’s greatest brand, so if anybody can resist shaming themselves, it ought to be them.

Nobel Prize Awarded for Research About Temperature and Touch 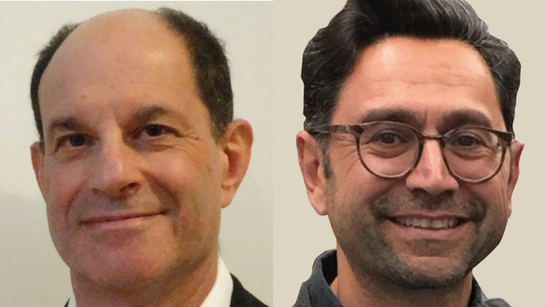 David Julius and Ardem Patapoutian were honored for their discoveries about how heat, cold and touch can initiate signals in the nervous system.

The Nobel Prize in Physiology or Medicine was awarded jointly on Monday to David Julius and Ardem Patapoutian, two scientists who independently discovered key mechanisms of how people sense heat, cold, touch and their own bodily movements.

Dr. Julius, a professor of physiology at the University of California, San Francisco, used a key ingredient in hot chili peppers to identify a protein in nerve cells that responds to uncomfortably hot temperatures.

Dr. Patapoutian, a molecular biologist at Scripps Research in La Jolla, Calif., led a team that, by poking individual cells with a tiny pipette, hit upon a receptor that responds to pressure, touch and the positioning of body parts.

After Dr. Julius’s pivotal discovery of a heat-sensing protein in 1997, pharmaceutical companies poured billions of dollars into looking for nonopioid drugs that could dull pain by targeting the receptors. But while research is ongoing, the related treatments have so far run into huge obstacles, scientists said, and interest from drug makers has largely dried up. …

Pain and pressure were among the last frontiers of scientists’ efforts to describe the molecular basis for sensations.

My guess is that the Nobel folks wanted to offer encouragement to basic science researchers interested in understanding pain in the hope that somebody might someday come up with a breakthrough that could eventually lead to alternative serious pain-management drugs to replace opioids and their synthetic cousins like fentanyl. Apparently, these two scientists’ work hasn’t paid off in that applied fashion, but signaling that you can win a Nobel in this subfield for basic research even without a real world breakthrough application might attract the next generation of young talent who someday might find the magic bullet that can render fentanyl obsolete for legitimate uses.

Dr. Patapoutian, who is of Armenian origin, grew up in Lebanon during the country’s long and calamitous civil war before fleeing to the United States with his brother in 1986 at age 18.

There are two basic types of Armenians:

The Western Armenians like Dr. Patapoutian tend to be the good ones, the medical researchers and the like.

Needing to establish residency in California so that he could afford college, Dr. Patapoutian worked eclectic jobs for a year, delivering pizzas and writing the weekly horoscopes for an Armenian newspaper.

At U.C.L.A., in the course of preparing to apply to medical school, he joined a research laboratory so that the professor would write him a good recommendation.

“I fell in love with doing basic research,” Dr. Patapoutian said in an interview. “That changed the trajectory of my career.”

He added: “In Lebanon, I didn’t even know about scientists as a career.”

Dr. Patapoutian said that he gravitated to studying the sense of touch and pain because those systems remained so mysterious. “When you find a field that’s not well understood,” he said, “it’s a great opportunity to dig in.”

Dr. Julius, too, became fixated on the question of how the body’s sensory receptors worked. Growing up in Brighton Beach, Brooklyn, he said that he began considering a career in science while at nearby Abraham Lincoln High School, where a former minor league baseball player turned physics teacher spoke to students about calculating the trajectory of a baseball.

“He was the person who made me think, ‘Maybe I should do science,’” Dr. Julius said.

Academically speaking, I was exceedingly fortunate to enroll in a physics class taught by Mr. Herb Isaacson, a minor league baseball player turned educator. Mr. Isaacson was a fireball who challenged us with ideas, not facts, and expected enthusiastic participation in return. He made physics fun (and even relevant to baseball) and I credit him for making me wonder whether science could be a career trajectory