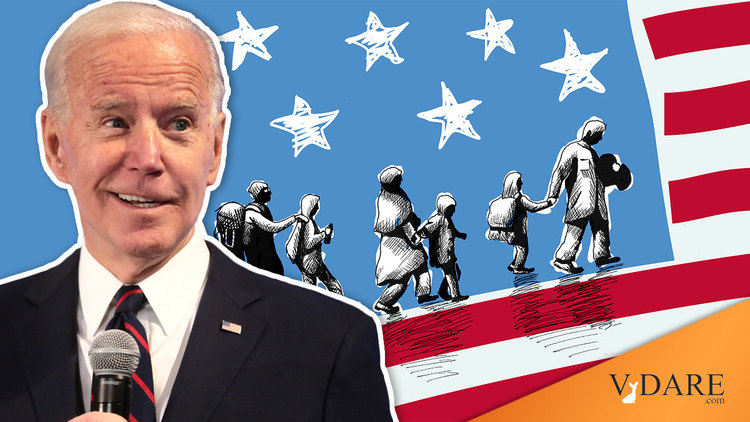 Biden Sets A Record For Lowest Number Of Refugees Admitted In One Year, Contractors Cry

But, LOL! They aren’t going so far as to call their team—Biden or Harris—names and disparage their characters for the lowest number of refugee admissions on record.

Editor:  Readers remember that the border invaders and most of the unvetted Afghan deluge are not considered legitimate refugees (yet).

Here is what The Hill is saying, and I have to laugh because once again we have Lutheran CEO Vignarajah crying about how little funding is flowing to the contractors for their "charitable" good works.

“Increasing the figure earlier on would have meant an infusion of resources [aka money, your money–ed] that were especially needed by local resettlement agencies that were hanging on by a thread.”

I’m not picking on Vignarajah, some contractor do-gooder CEOs make gobs more than she does, it is just that she can’t seem to stay out of the limelight.

I was interested to see that although Joe told Congress that the ceiling for the 2022 fiscal year will be 125,000 refugees from Asia, Africa, Europe and the Middle East—a flow that was supposed to begin 4 days ago—he has yet to sign the order.

After a litany of complaints about Biden’s back and forth on the ceiling in his first months in office, The Hill reporter comments:

The reversal was whiplash for the resettlement agencies that contract with the government and who had set about rehiring staff in order to rebuild a system that atrophied under the Trump administration.

Uh-oh! Biden is making the contractors jittery with this:

Biden notified Congress of his recommendation to set the refugee cap at 125,000 for the coming fiscal year, though he has yet to sign the presidential determination that makes it official.

But the report seems to express some internal doubt about the government’s ability to meet that goal, writing to Congress that the State Department would issue funding for 65,000 refugees.

“Those funding levels will be re-evaluated and increased as appropriate as the year progresses and as it becomes clearer how much progress can be made against the target,” the White House wrote.

Read the whole article, there are some interesting bits of information for serious students of the refugee resettlement industry.

Lutherans Hanging by a Thread?  Hardly!

So, once again I made a trip to USA Spending!  See what I found!  Lutheran Immigration and Refugee Service is presently at about 87% federally funded (you can calculate that by examining a recent IRS Form 990).

Check out their taxpayer-funded boodle here.  (Screenshot below)

It is very clear that Trump’s presence in the White House didn’t deplete their funds and in fact they did better under some Trump years than under Obama!

It is my fervent hope that one day a real reporter will call them out for their poor-mouthing lies….

*** These are the nine federal refugee resettlement contractors. Not only do they place refugees in cities large and small but are in the driver’s seat when determining which cities will get which refugees.