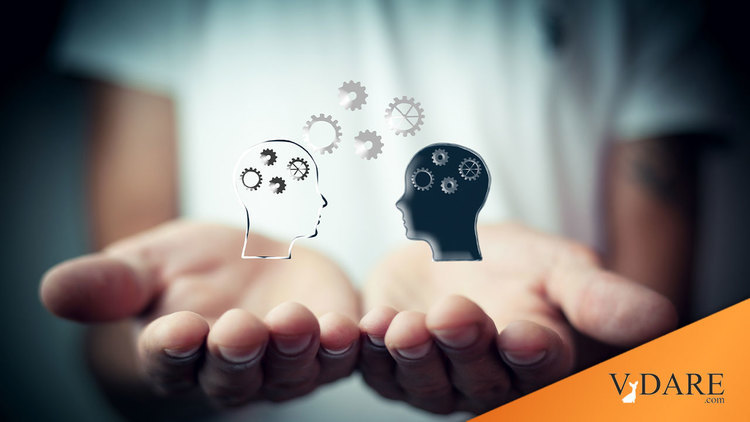 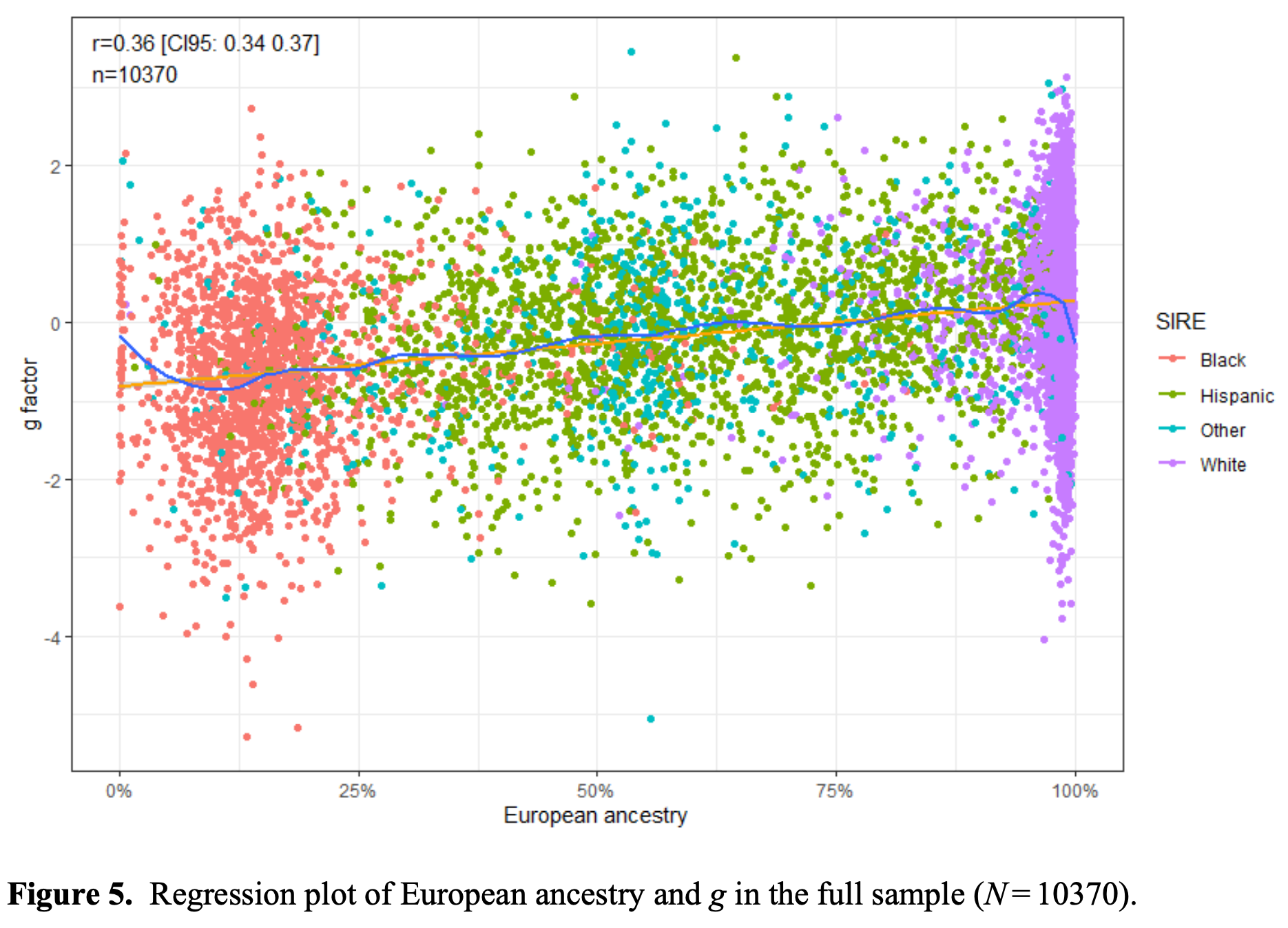 Back on July 1, 2021, I reported on a new preprint scientific paper by Bryan Pesta and Gregory Connor entitled “Linear and partially linear models of behavioural trait variation using admixture regression” that looked at racial DNA and cognitive test performance of about 10,000 children in the colossally well-funded national Adolescent Brain Cognitive Development study. That paper focused on the challenging theoretical issues of trying to answer questions about whether IQ correlates with the racial admixture of the child.

Now, Connor is back, this time with co-authors John Fuerst and Meng Hu, with a new preprint (i.e., not yet published in a peer-reviewed journal) focusing on the data from the ABCD:

… The Adolescent Brain Cognitive Development Study (ABCD) is a collaborative longitudinal project involving 21 sites across the USA. ABCD is the largest, longitudinal study of brain development and child health ever conducted in the USA. It was created to research the psychological and neurobiological bases of human development. At baseline, around 11,000 children aged 9-10 years were sampled, mostly from public and private elementary schools. A probabilistic sampling strategy was used, with the goal of creating a broadly representative sample of US children in that age range. Children with severe neurological, psychiatric, or medical conditions were excluded. Children were also excluded if they were not fluent in English or if their parents were not fluent in either English or Spanish. Parents provided informed consent. For this study, we utilized the baseline ABCD 3.01 data. We excluded individuals missing either cognitive or admixture scores. We also excluded any individual identified as being either Asian or Pacific Islander in order to focus on groups who were primarily of African, European, and Amerindian ancestry. This left 10,370 children.

Using a standard algorithm for estimating racial admixture, the following graph shows the genetic admixture of the sizable sample compared with their “SIRE” — self-identified race/ethnicity. Kids whose parents self-identified them as white are the purple dots clustered largely in the lower left corner of European ancestry. The authors found that self-identified white children have 98% white ancestry, 1% black, and 1% Amerindian.

The other main types of Hispanics are mulattos (white and black) and pardos (all three races).

In this study, in which Asians and Pacific Islanders are excluded to keep the focus on the Big Three race/ethnic groups, the Other group is largely children whose parent identified them as non-Hispanic and both black and white. They average 62% European, 32% African, and 4% Amerindian genetic ancestry.

Here’s a scatter plot of Hispanics with European ancestry along the horizontal axis and the g factor of intelligence along the vertical axis: The intelligence-Euro admixture correlation for Hispanics is a modest but visible 0.23.

The scatter plot for self-identified black children shows that, unlike Hispanics, most cluster around, say, 2% to 30% white ancestry. The mean is 16% with a standard deviation of 11%. About 68% of self-identified blacks would fall between 5% white and 27% white. That’s a lot of restriction of range. Eyeballing the graph, I only count about 34 of the 1690 self-identified black kids as being more than 50% white by genetic ancestry.

I don’t think it is at all well-known among white intellectuals, who are constantly saying that American race isn’t scientific due to the One Drop Rule, what an overwhelming percentage of self-identified blacks are at least half black by ancestry. As I figured out in 2001, the historic One Drop Rule and social and legal sanctions on interracial marriage made it rare for anybody who publicly identified as black to get much above 50% white.

The correlation between g and European admixture is a low (but positive) 0.10. The majority of 100% black children (often the children of immigrants selected for their academics) are above the African-American average in intelligence. If you select only for black children with American-born parents, the correlation goes up to a still low 0.13.

These results can account for why people appear to sincerely disagree on whether there are differences in average intelligence between African-Americans depending on skin color. There are differences in intelligence regarding ancestry, but they are not all that big plus there isn’t that much dispersion in ancestral makeup among self-identifying non-Hispanic blacks. Finally, Africans of 100% black ancestry in the U.S. tend to be somewhat smarter than less purely black people of African-descent.

On the other hand, there are so many standard deviations of difference in percent of European ancestry between self-identified blacks (16%) and self-identified whites (98%) that this still adds up to accounting for much of the IQ gap.

For self-identifying non-Hispanic (and non-Asian) Others (mostly black-white mixes): Here the correlation between g and European ancestry is a modest 0.19.

If you plot all 10,370 kids in this study on one graph, you get a moderate 0.36 correlation between g and European ancestry. The results above indicate that factors associated with genetic ancestry are related to g within SIRE groups. These findings also suggest that these same factors explain differences between SIRE groups (Halder et al., 2015). Using the full sample, we examine this implication. The relation between European ancestry and g for the full sample is shown in Figure 5. As expected, there is a strong positive association for the SIRE groups between ancestry and g (r = .36; N = 10370). Because the range of ancestry is not restricted — restriction of range attenuates correlations — the correlation is high. In this plot, we again see the uptick at the lowest decile of European admixture. This is due to the relatively high scores of children of recent African immigrants.

Interestingly, the highest single scorer on this intensive set of cognitive tests was a self-identified Other of just over 50% European ancestry.

And children who identify as white and are very close to 100% white seem to score slightly lower on the tests than whites who are a few percent nonwhite by ancestry.

There’s much else of interest in the paper.

By the way, back in 2019, I reported on a study entitled “Global Ancestry and Cognitive Ability” by Jordan Lasker, Bryan J. Pesta, John G. R. Fuerst and Emil O. W. Kirkegaard that did a similar analysis of 9,498 young people in the Philadelphia Neurodevelopmental Cohort. Looks like the results were more or less similar to the new ABCD papers, but I look forward to seeing somebody add the two databases together and see what shakes out of a sample of almost 20,000 youths.