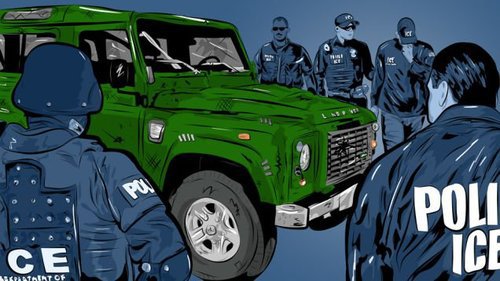 It should not be a surprise that an obscure car enthusiasts blog has done better reporting on the illegal immigration and Department of Homeland Security failings issues than America's Cultural Marxist Main Stream Media.

Jalopnik, a gearhead website, has been all over the ongoing issue of ICE SVU's ignoring immigration law enforcement in favor of tracking down alleged illegal Land Rover Defender imports—while 20 million illegal aliens remain in the United States unmolested, something only VDare.com and this blogger have addressed. In this case, ICE SVU is doing the work of the National Highway Traffic Safety Administration (NHTSA) and Environmental Protection Agency (EPA). And ICE SVU gets to play with its new toys while raiding American citizens. No MRAP-led raids on illegal aliens for ICE SVU!

Jennifer Brinkley had a typical summer morning planned on July 15: get up, get dressed, and take her son to tennis practice. That changed when six body armor-clad Department of Homeland Security agents and local police officers showed up at her North Carolina home and blocked her driveway. They were there because of an arbitrary law promulgated 26 years ago to guard the prerogatives — and profits —of automakers and car dealers. Specifically, they were there to take Brinkley's truck.

"They wouldn't even tell me why it was being seized," said Brinkley, who lives near Charlotte. Though she didn't understand what was happening, she reluctantly complied with the agents' request. "If you're a law-abiding citizen, what can you do?" she said.

Around 6 a.m. that same day in Yakima, Wash., and Mobile, Ala., Homeland Security agents and police came to the homes of Mike Rodeiger and Jack Montgomery, respectively, with warrants that ordered more truck seizures. Montgomery, an attorney, said they threatened to arrest him for obstruction of justice if he or his family took photos of them.

"It was disgusting," said Montgomery, an attorney who asked Jalopnik to alter his last name for this story, out of fear that the incident could harm his legal practice. "It's beyond weird. Weird would be a nice word for it. This is thuggery."

Why Are The Feds Obsessed With Seizing These People's Old Trucks?  by Patrick George, Jalopnik February 11, 2015

Why These Rusty Old Trucks?

What has owners truly perplexed is what prompted the investigation into Richardet in the first place, as well as the crackdown on Defenders as a whole. Montgomery wonders why priorities were placed on a coordinated, nationwide seizure of cars by customs officials around the same time the country was dealing with a humanitarian crisis as tens of thousands of children came flooding across the U.S.-Mexico border.

Jalopnik gets it, and do many of its readers given the comments on the article. However, RINOs continue to surrender on the issue while at the same time the American people are getting it concerning the election of a new people.

Because you know that Mexican immigrants will happily vote for enviro-commies who think a 1990 Land Rover Defender is an threat to health and safety but a 1980 Defender isn't.