Gaydar Machine: You Are Bad and We Are Good, Scientifically Speaking

From the New York Times, yet another article on a study we already discussed:

Why Stanford Researchers Tried to Create a ‘Gaydar’ Machine

Michal Kosinski felt he had good reason to teach a machine to detect sexual orientation.

An Israeli start-up had started hawking a service that predicted terrorist proclivities based on facial analysis. Chinese companies were developing facial recognition software not only to catch known criminals — but also to help the government predict who might break the law next.

And all around Silicon Valley, where Dr. Kosinski works as a professor at Stanford Graduate School of Business, entrepreneurs were talking about faces as if they were gold waiting to be mined.

Few seemed concerned. So to call attention to the privacy risks, he decided to show that it was possible to use facial recognition analysis to detect something intimate, something “people should have full rights to keep private.”

After considering atheism, he settled on sexual orientation.

Whether he has now created “A.I. gaydar,” and whether that’s even an ethical line of inquiry, has been hotly debated over the past several weeks, ever since a draft of his study was posted online.

Presented with photos of gay men and straight men, a computer program was able to determine which of the two was gay with 81 percent accuracy, according to Dr. Kosinski and co-author Yilun Wang’s paper. …

Advocacy groups like Glaad and the Human Rights Campaign denounced the study as “junk science” that “threatens the safety and privacy of LGBTQ and non-LGBTQ people alike.”

Which one is it: “junk science” that doesn’t work or good science that poses a threat to privacy?

… Some argued that the study is just the latest example of a disturbing technology-fueled revival of physiognomy, the long discredited notion that personality traits can be revealed by measuring the size and shape of a person’s eyes, nose and face.

… At the heart of the controversy is rising concern about the potential for facial analysis to be misused and for findings about its effectiveness to be distorted.

Actually, that’s not “rising concern” in the singular, but two opposite concerns.

Basically, most gay men want to believe a bunch of different things, such as: 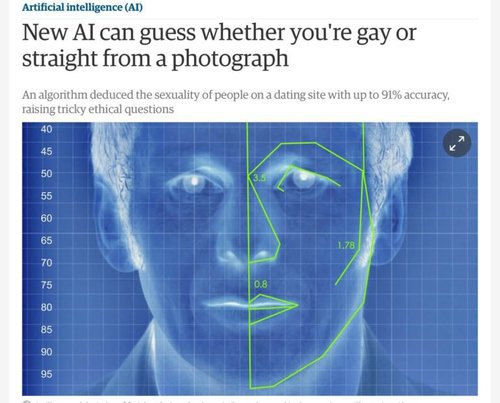 But because gays are a Privileged Group today, it’s considered evil for non-gays to notice this incoherence. Among gays, noticing shows poor Team Spirit if done in a venue where straights might hear about it.

… “At the very best, it’s a highly inaccurate science,” she said of promises to predict criminal behavior, intelligence and other character traits from faces. “At its very worst, this is racism by algorithm.”

Dr. Kosinski and Mr. Wang began by copying, or “scraping,” photos from more than 75,000 online dating profiles of men and women in the United States. …

In one section of the study, the authors presented what they called “composite heterosexual faces,” left, and “composite gay faces,” right, built by averaging landmark locations of the faces classified as most and least likely to be gay. This did not sit well with some who suggested that this is just the latest example of physiognomy, rationalized by deep neural networks.

As we all know, “physiognomy” is Not Science and the fact that it works in some situations is just more proof that, scientifically speaking, You Are Bad and We Are Good.

Okay, but a lot of effort was put into having the algorithm “train” itself using practice examples. How much would human gaydar improve if given a chance to practice?

Nicholas Rule, a psychology professor at the University of Toronto, also studies facial perception. Using dating profile photos as well as photos taken in a lab, he has consistently found that photos of a face provide clues to all kinds of attributes, including sexuality and social class.

“Can artificial intelligence actually tell if you’re gay from your face? It feels weird — it feels like physiognomy,” he said.

“I still personally sometimes feel uncomfortable, and I have to reconcile this as a scientist — but this is what the data shows,” said Dr. Rule, who is gay.