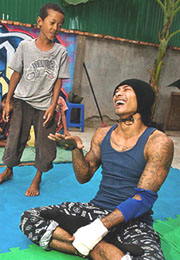 There’s nothing like a story of hard luck, struggle and eventual success to illustrate the resilience of the human spirit.

Indeed, the experience so far of Tuy ”K.K.” Sobil (pictured) also shows how being deported need not be a sentence to misery at all, but instead opens a potential door to discovering one’s ethnic roots and developing a far more meaningful life. If K.K. had remained in southern California as a member of the Long Beach Crips, he would have been just another violent thug with prospects of prison and an early death.

But because of the kindness of a deportation order, he was able to remake his life into one of service to others, helping many street kids of Phnom Penh by teaching them break-dancing, as well as more traditional coping skills.

Reporting from Phnom Penh, Cambodia – His arms and chest coated with gangland-style tattoos, his eyebrow pierced, Tuy ”K.K.” Sobil sits in a cafe in Phnom Penh beside his 5-year-old son, Unique, adopted from drug dealer parents who couldn’t cope.

”I’m trying to get him to eat his vegetables,” he said. ”He gets his bad habits from me.”

K.K., short for ”Krazy Kat,” knows all about bad habits: The onetime member of the Long Beach Crips served eight years in prison for armed robbery before being deported in 2004 to Cambodia, his parents’ homeland.

Now, six years after he found himself abandoned, impoverished and largely unwelcome in an ancestral land he’d never seen, the 32-year-old has tapped into long-forgotten break-dancing skills to become one of Cambodia’s unlikeliest role models.

His goal: to keep thousands of street children from making the same mistakes he did.

K.K.’s life was upended by a U.S. law that authorized deportations of noncitizens with any criminal conviction, from murder to shoplifting. Although he was born in a Thai refugee camp, never visited Cambodia and lived in the United States since he was 4, neither K.K. nor his illiterate parents formally applied for citizenship after he turned 18.

But K.K. reckons the deportation pulled him out of a life that probably would have led him back to prison, or possibly to his death by now. ”Doper, may he rest in peace, Doper passed away,” he said of one former gang member.

When K.K. landed, shellshocked, in Phnom Penh and looked around at the impoverished, war-torn country, the last thing he envisioned was a return to break dancing, which he hadn’t done since he was 13. But after another deportee who knew of his reputation spread the word of his skills, street urchins badgered him until he finally agreed to give lessons in his living room.

”There were 40 kids in the room every night,” said Michael Otto, K.K.’s best man at his wedding to a Cambodian woman. ”It was like a sauna.”

Working with youngsters left little room for self-pity. Sure, he’d had it tough. But at least the United States had public schools and welfare departments, both sorely lacking here.

”I realized I needed to help out,” he said.

Before long, he left his job at Korsang, a nonprofit drug treatment center, to start the Tiny Toones youth center, housed in a run-down building with surging electricity, rats and leaking walls. Poverty, gangs, drugs and family abuse, a legacy of decades of war and dysfunctional government, left thousands of orphans and street children badly in need of help.

Although rapping, break dancing, beat boxing, and deejaying – and K.K. – are the center’s trademark, its real mission is to empower youngsters, help them kick drugs, and teach basic language, arts and computer skills.

Congratulations to K.K. for turning his life around and showing how deportation is a good thing!