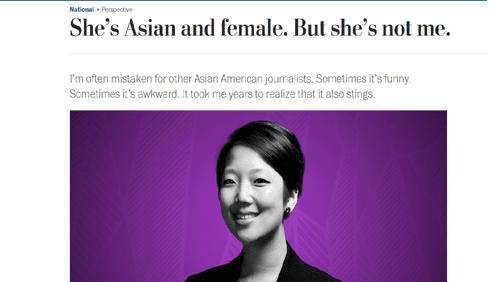 Let’s Talk about My Looks, My Career, and My Feelings, Part CXXXVII. From the Washington Post:

She’s Asian and female. But she’s not me.

… In every news job I’ve had, I have been confused with another Asian woman reporter — a steady undercurrent in my career. I’m hardly alone in experiencing this, and it’s certainly not just Asians who are confused for each other. There is some science behind people’s failure to grasp cross-racial identification.

… These instances are rarely intentional, and can be more embarrassing for the person who made the error than for me. Sometimes it’s genuinely funny. Other times, it’s just awkward.

It took me years to realize that it also stings.

Whether the person acted without malice, the effect is the same: It erases my body of work for someone else’s, simply because their ancestors were born on the same continent as mine. It tells me that my place in journalism — and that of the other Asian reporter they confused me for — is dispensable, interchangeable and indistinguishable. That no matter what I do in my career, I am but an Asian who may or may not have ever worked in journalism at all.

… But what these interactions ultimately do is hurl my otherness at me, reminding me that I have no ownership over the career I have worked for since I was 15 years old. That I don’t deserve the dignity of earning credit for my accomplishments or owning up to my failures. That I must shoulder the blame of others’ mistakes or somehow share their successes, just because they are Asian and female.

When you peel back the veil of a careless, awkward mistake, you see it for what it truly is: an act of unconscious bias at best, drive-by racism at worst. And it has real consequences for us in the workplace and holds us back in ways we can’t control.

Clearly, the solution is to import lots more Asians.

Seriously, I see more and more opeds by minorities arguing that it’s racist that their race isn’t the majority in this country. Keep an eye out and you’ll notice it too.

In contrast, this is pretty good: