The wheels of justice turn slowly, or so they say, and it has taken seven years for Indian immigrant Subhash Chander to get his sentence after murdering his daughter, son-in-law and grandson. The case seemed a slam-dunk in terms of evidence being quickly assembled. Less than a week after the crime, the New York Times reported that Chander confessed.

Perhaps the diversity aspect, particularly the motivation of caste differences that Indians include in their cultural baggage, made the court happy to drag the trial out for years. Why remind Americans that all diversity is not equal? 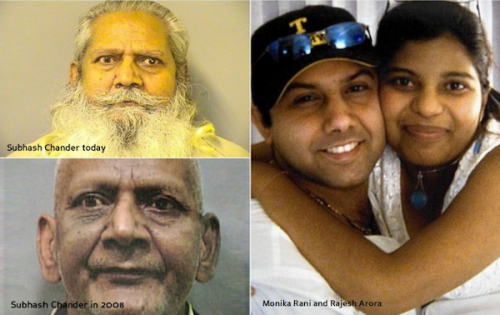 It was a terrible crime, but could have been far worse. Chander poured gasoline and lit it near the door of the young family’s apartment, but the whole building of 36 units went up in flames, leaving more than 70 individuals homeless. Residents were jumping from balconies to escape.

Prosecutor Robert Milan remarked, “It could have been one of the largest homicides in American history but for the grace of God.”

Below, the scene of the 2007 arson fire that killed three in Oak Forest, a suburb of Chicago. 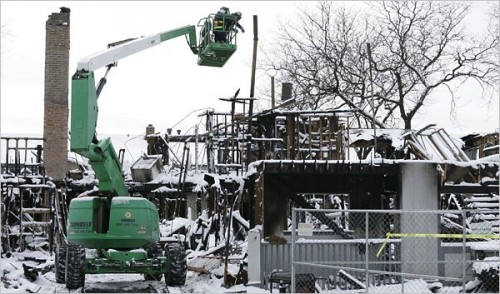 Unsurprisingly, the ChiTrib referred to the culturally motivated killer from India as an “Oak Forest man.”

More than seven years after an Oak Forest couple and their 3-year-old son died in a fire at their apartment building, a Cook County jury convicted the woman’s father of setting the fire.

Subhash Chander, 64, was found guilty late Thursday by a jury of three counts of first-degree murder for spreading gasoline at the 36-unit building and igniting it — apparently out of anger that his daughter had married beneath her status in India’s caste system and without his consent, according to prosecutors.

Killed in the December 2007 blaze, which destroyed the building, 15859 LeClaire Ave., were Monika Rani, 22, who was about five months pregnant with her second child; her husband Rajesh Arora, 30; and their son, Vansh Kumar. Their bodies were found inside the building.

Chander, who lived across the street from the couple, has been held without bail at the Cook County Jail since Jan. 1, 2008, a sheriff’s department spokeswoman said. His sentencing is scheduled for April 16. He faces life imprisonment.

Charges of arson and the intentional homicide of an unborn child were dropped at trial, according to court records.

Oak Forest police and firefighters responded to the fire at the 36-unit building on Dec. 29, 2007, and after it was extinguished, determined that the second floor had collapsed and found the three victims.

Investigators located a witness who saw a man of Indian descent in the first-floor hallway immediately after the start of the fire, carrying a plastic container that smelled of gasoline, according to evidence at the trial at the county courthouse in Markham.

The witness told police that the man lived across the street, and when officers went to Chander’s apartment, they noticed a strong odor of gasoline and found a plastic pharmaceutical bottle, nearly a gallon in size, containing gasoline in a trash bin outside his apartment building, prosecutors said. The container was labeled with Chander’s name, evidence showed.

Video surveillance revealed a man matching Chander’s description using the same container to buy gas about two hours before the start of the fire, according to prosecutors. Multiple witnesses, including the gas station attendant, positively identified Chander in a physical lineup, evidence showed.

Chander and his son-in-law had a strained relationship throughout his marriage to Rani, which lasted a little more than three years, Assistant State’s Attorney Robert Milan told the Chicago Tribune in 2008.

“Apparently there’s been trouble going on between the two of them for years. It’s pretty clear from the defendant’s own statements and other evidence that we have that he did not like his son-in-law at all,” Milan said.

When police and firefighters arrived at the two-story building that night, residents were jumping from the balconies and flames were consuming the structure — a scene that Oak Forest police investigator Bob Frias will never forget.

“I remember seeing the sheer devastation, the sense of loss in people’s eyes. And that was before we realized three people died. It could have been dozens more,” Frias said Friday.

He said thanks to the eyewitness, the investigation quickly led to Chander, and police “knew we had the right guy” when he was arrested the next day. Chandler smelled of gasoline, he said, adding that a “little dab of that goes a long way.”

Frias thanked the witnesses who testified during the trial, which was delayed for years by legal maneuvering, including appeals of various pretrial rulings.

After all that time, “they had the courage and commitment to still come forward and cooperate,” he said. “And the state’s attorney’s office was as determined and committed as we were” to obtain a conviction.