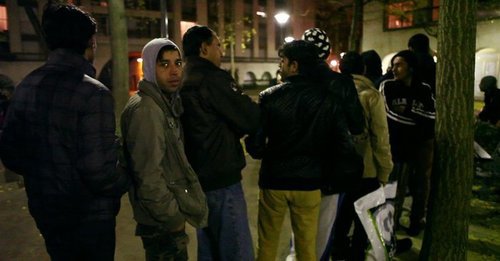 Frontlash: The NYT More Worried About "Backlash" Against Syrian "Migrants" Than Mass Murder

A couple of stories from the NYT:

Refugees in central Paris have heightened fears about their security and their future in France following Friday’s attacks.

By RICK LYMAN and ALISON SMALE NOV. 15, 2015 WARSAW — With hundreds of thousands of migrants pouring across its borders, and economic and political pressure growing to enact tighter controls, Europe has nevertheless stayed fairly steady in its response to the humanitarian emergency.

But after the attacks on Friday in Paris, fears that Islamic terrorists might infiltrate the migrant flow have deepened across the Continent, and the talk has shifted sharply to security over compassion.

Officials across Europe were calling for even stronger border controls, stricter screening of those arriving and some way to persuade people to stay in the Middle East.

So far, it is mostly talk. But in recent weeks, European countries from Sweden to Slovenia have been enacting new border controls, erecting border fences and discussing ways to better screen and register the migrants.

And since the attacks by militants, and the discovery of a passport of a recent Syrian migrant near the scene of a suicide bombing, the rising antimigrant sentiment seems poised to substantially shift the conversation. Perhaps it could even change both policies and attitudes toward the migrants, as they arrive, make their way across Europe and land in the countries where they hope to make their homes.

In the short run, this shift in tone could complicate the only significant plan that the European Union now has to slow down or bring order to the resettling of more than a million people: its plans to relocate 160,000 migrants across Europe. It could also affect future attempts by the bloc and others to fashion a more comprehensive and unified approach to the crisis.

Germany, which has accepted the largest number of migrants and is the destination of choice for many of them, is crucial to any solution to the crisis. But even there resistance is growing.

These guys are in an “even” groove.

“The days of uncontrolled immigration and illegal entry can’t continue just like that,” insisted Markus Söder, the finance minister of Bavaria and a leader of its Christian Social Union, in an interview on Sunday with the Welt am Sonntag newspaper. “Paris changes everything.”

Much of the harshest language is coming from Eastern European leaders, who have never been warm to the arrival of thousands of largely poor and Muslim migrants. Since the attacks in Paris on Friday, leaders have stepped up their criticism.

Karl Erjavec, Slovenia’s foreign minister, warned that the Paris attacks made it clear that hiding among the throngs of migrants are some “with bad intentions.”

… Andrej Babis, the Czech finance minister, said that Europe was at war and that concrete steps needed to be taken — including, perhaps, closing the open borders of the Schengen group, which made passport-free travel possible among 26 nations, one of the Continent’s proudest achievements.

The concerns were not limited to government officials.

“Along with refugees, there are also terrorists coming,” Mariana Koleva, 40, said on a shopping trip to Edirne, Turkey, from her home in Bulgaria.

“I don’t want Romania now to receive migrants, especially after what happened in Paris,” said Gabriela, 38, a bank analyst in Bucharest who declined to give her last name because her employer would not approve. “We could also be in danger in the future.”

I think it might be worth looking into why European citizens that voicing rational skepticism about what the big shots have cooked up for them could cost them their jobs.

Jean-Claude Juncker, the president of the European Commission, who made an impassioned speech this summer urging a unified bloc response to the migrants, again urged tolerance.

“Those who organized these attacks, and those who carried them out, are exactly those who the refugees are fleeing,” Mr. Juncker told reporters Sunday at the Group of 20 summit meeting in Antalya, Turkey.

Sure. And you know that how?

And what about in a few years? Consider the Tsarnaev Bomb Brothers, who were admitted as refugees when children. Dad Tsarnaev is not great  addition to America, but at least he’s not a homicidal maniac. In contrast, growing up in Cambridge, MA, surrounded by patriotic conservative rednecks, it was only natural for the oppressed younger Tsarnaevs to blow up the Boston Marathon.

“And so there is no need for an overall review of the European policy on refugees.”

That might make me look bad, and what could be a high priority for the Continent that suppressing any doubts about my leadership?

Marie Hermanova, the spokeswoman for a team of Czech volunteers who have been working with the migrants, said her group was bracing for a rising anti-migrant mood.

“What happened in Paris on Friday night is happening in Syria every day, and it is exactly why those people are running away,” she said. “Our volunteers are extremely unhappy about the wave of hate this will likely release.”

Tereza Novak, the director of Slovenska Filantropija, a humanitarian organization that has worked with migrants for two decades, echoed those concerns. “It’s unfortunate that such violence gives wings to those who spread fear and loathing of refugees,” she said.

… In his interview with Welt, Mr. Söder, the Bavarian finance minister, said, “It would be good if Angela Merkel acknowledged that the opening of the border for an unlimited period of time was a mistake.”

Ms. Merkel, however, was giving no indication that she was thinking of shifting her stance. And, said Klemen Groselj, a security and defense analyst in Slovenia, that is the stance that most matters.

“No matter what happens anywhere in Europe, when it comes to the migrant crisis, all eyes immediately turn to Germany and what the chancellor will do,” he said.

… The answer to the Paris attacks, said Peter N. Bouckaert, the emergencies director for Human Rights Watch, is not to shut the

door on those desperately fleeing war in Syria, Iraq and Afghanistan, including many fleeing from the Islamic State.

“The answer is to put in place a coherent E.U. asylum policy that provides those fleeing war and repression with safe and legal alternatives to get that asylum, without having to risk their lives,” Mr. Bouckaert said in a Facebook post.

Standing outside the French Embassy in Riga, Latvia, Marcis Zitmanis, 35, watched his daughter light a candle in an array of flowers and letters of condolence.

“We should not blame the migrants,” said Mr. Zitmanis, a construction engineer. “If we help them more, the risk of a terror attack happening again would be less.”