From The Radio Derb Email Bag: Soldiers Of Odin, Etc. 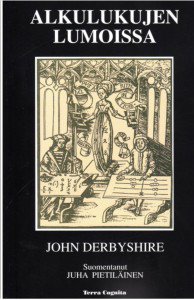 Just a few, as I try to catch up on the mail.

Many, many emails about Finland, following my remarks about the vigilante group Soldiers of Odin over there.  Who knew we had so many Finnish readers?  I urge them all to purchase a copy of Alkulukujen Lumoissa.

Why, I wondered, to the vigilantes call themselves Soldiers of Odin when the Finns are not Norsemen?

The name "Soldiers of Odin" is probably just a marketing ploy,  as Väinämöinen Sotila  would be hard to understand for the Mail. And since the group has a couple of chapters in Norway already, it was probably wise. (Finns are to large extent still looked upon as subhumans in Scandinavia, even if they are 68% of the same stock.)

The Finns are indeed not Germanic, but there is a Swedish-speaking minority in Finland that was once one-third of the population and is now 5.6% (partly because people decided to speak Finnish after independence). The language is phenomenally complicated with 14 noun cases. "Soldiers of Odin" in Finnish is  Odinin soturit where soturit means "warriors". Väinämöinen has plenty of diacritics, and the genitive is Väinämöisen. So it should be Väinämöisen soturit or something. . .

The Swedish-speakers are Finns, as the country has spoken both Swedish and Finnish for centuries. The largest minority in Finland is therefore the Russians, followed by the Estonians. The largest non-white group is the Somalis. As you can see from here, Somali numbers have grown thus: 1990—44; 1995—4,044; 2014—16,721.

Reader C makes a can't-be-made-often-enough point about the 32,000 that Finland took in last year from the migrant flood:

Thirty-two thousand is only 0.58 percent of the Finnish population. That doesn't sound very much. However, when it comes to immigrants, we should always multiply their demographic impact by about 2.

The reason is very simple. A normal population consists of about 3 generations, but immigrants consist usually of about 1.5 generation. When the bulk of immigrants are young males, then we should multiply their number by about 4 to get their long-run demographic impact.

They will import a wife and then produce children and grandchildren with their wife before they die.

I arrived in Canada from Brazil in 1973 with my parents and 5 siblings. So, we were 8. My parents are deceased, but my siblings produced 16 children and so far they have 12 grandchildren. Those 8 that came in 1973 are now 17. I counted the children as 1/2 and the grandchildren as 1/4.

A fed-up reader (I get a lot of those) laments that he'd like to emigrate to New Zealand, but is too old.

You don't have to be old, Sir:

I grew up listening to my dad rhapsodize about New Zealand, where he had spent the happiest days of his life. Thus enthused, after graduating college and working a couple of years, I decided to give New Zealand a try.

I went to New Zealand House in London. There was a guy at a desk in the lobby. I approached him and stated my purpose. He pushed a printed sheet of paper at me. It was a list of occupations, most of them skilled manual trades — carpenters, electricians, and an astonishing number of things to do with sheep.

"You in any of those occupations?" asked the Kiwi.

He took back the sheet and scrutinized it. "Nope. Don't see it. I guess we've got all we need. Sorry!"

I never did get to see New Zealand. I did, though, walk out of New Zealand House with a grudging respect for the clarity and rationality of their immigration procedures.

(Forty years on, they maintain those high standards. They recently denied a settlement visa to a British woman on the grounds that she was too fat.) [An Immigration Time-Out by John Derbyshire;NRO, December 15th 2009.]

Another reader is vexed at my saying, in last week's Radio Derb, that I was kindly, or not-unkindly, disposed towards Bernie Sanders on the grounds that "any enemy of Mrs Clinton is a friend of the Republic."

That raises several questions. First, how you would reconcile such a position with comments that you had made about Mrs. Clinton back in the October 23rd edition of Radio Derb. Then, you said that we could certainly do worse than Hillary for a president and proceeded to give reasons why she was at least no worse and even not as bad as any number of other likely candidates.

Well, nations can survive their enemies.  As I said in October:

Personally, I'm hoping to have the opportunity to vote Trump for President. Mrs Clinton's not the worst alternative, though. I'd actually vote for her in preference to some GOP donorist sock puppet like Bush or Marco Rubio. The Republic will survive four years of Hillary.

And Radio Derb apparently has some Sandersista listeners:

I was pleased to hear a positive mention of Bernie Sanders on Radio Derb this past weekend (even if it was more anti Hillary than pro Bernie). Your dismissal of Rubio as the "donorist candidate" was also an implicit endorsement of Sanders—the anti-donorist candidate.   The next step is to embrace Sanders as the best RadioDerb candidate out there.  No candidate is as forthright and consistent in opposing the billionaires who are intent on completing a slow motion coup d'état of our country.  The socialist and progressive labels are a distraction.  No serious candidate in my lifetime has been so plainly and completely on the side of the common citizen.  Forget the blowhard billionaire Trump and join the revolution!

I don't know about "on the side of the common citizen"; but Betsy McCaughey, who has a good track record on healthcare issues, tells us he's way on the side of public-sector unions.

In April 2014, a whistleblower exposed scandalous abuses at the Phoenix VA, where staff concealed wait lists to make themselves eligible for bonuses while sick vets suffered without care. In response, Sen. Marco Rubio (R-Fla.) proposed empowering the VA secretary to fire managers linked to such deceptions.

In the matter of Z! Haukeness, it seems that s/he is indeed Lucas John Haukeness.  S/he has a 2010 arrest record from Maricopa County, AZ—presumably from harassing Sheriff Joe.  Her/his mother sponsored the attempt to recall Wisconsin Governor Scott Walker in 2011.  Z!'s antecedents seem to be Prussian-Jewish.  These titbits and much else from an exceptionally diligent reader, to whom many thanks.

"The United States is founded on human rights," said Sandra Jimenez, the principal of High Point High School in Prince George’s County, Md., a Washington suburb where the immigrant population has grown rapidly. "The only reason these people are here is because they are desperate. These people are coming to survive." [As immigration resurges, U.S. public schools help children find their footing by Emma Brown; Washington Post, February 7th.]

Finally, a reader passes on this very romantic immigrant story from the Antipodes:

According to [Noela] Rukundo [the "Australia woman" of the headline], who gave her first interview to ABC News in Australia, it all began when she flew from Australia to Burundi, a country in central Africa, to attend her stepmother's funeral. Kalala stayed home.

As she relaxed in her hotel room, Rukundo received a call from her husband. "I said I was going to bed," she recalled to the BBC. "He told me, 'To bed? Why are you sleeping so early.'"

Rukundo said that her husband convinced her to "go outside for fresh air."

Outside, Rukundo stepped into a nightmare. She was approached by a gunman who forced her into a nearby car, where two other men waited . . . [Australia Woman Shows Up At Her Own Funeral – To Confront Her Husband Who Paid To Have Her Killed by Steve Helling; People, February 5th 2016.]

My reader adds:  "Note that she has eight kids."