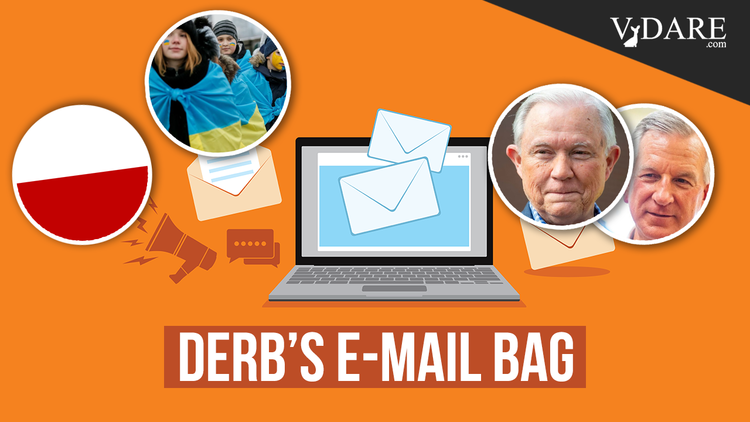 From The Derbyshire Email Bag: Poland, Alabama, And Ukraine

Just a few arising from my July 17th podcast.

1. Will Poland go Irish?  I asked any listeners who know more than I do about Poland (which is to say, well-nigh any listeners at all) to comment on my speculation that Poland, in spite of last week's encouraging election victory for the conservative-nationalist party, may take a progressive turn. I drew parallels with Ireland, which was once likewise conservative, Catholic, and in the shadow of a more powerful neighbor, but is now the Heart of Wokeness.

Readers who emailed in uniformly agreed that such a turn is likely. One pointed out that Rod Dreher was a year ahead of me on this speculation. In his 7/6/19 piece at The American Conservative Rod actually quotes one of his Polish acquaintances thus: "We all say that in ten years, Poland will be a second Ireland."

Another listener referred me to this Axios report by Dave Lawler, whose headline tells the tale: "Older, rural voters tip Poland's election to the incumbent."

We National Conservatives have been drawing much comfort from the steadfastness of the Visegrad nations in the face of EU directives to embrace mass Third World immigration. We may be headed for disappointment.

A listener enlightens me.

Although not born and bred in the South, I have lived in [name of an adjacent state] for almost forty years, and I can tell you the reason Tuberville really won: football. That is the only word you ever have to say in the South to get anything or gain approval. Not a day goes by that I don’t hear something explained via a football story or metaphor. (As if using a football analogy would actually help explain something to someone who NEVER watches football and LOATHES it because it is at the forefront of every conversation, and the reason for scheduling things like school.)

True, Sessions may not have Trump's support, but I can guarantee the actual reason Tuberville won is because he is associated with football. And in the South, there is no greater accolade to be bestowed. Football is the highest endorsement/validation anyone can be given.

I suspected something of the kind, although I hesitated to charge the good people of Alabama—native place of two of my heroes, Hank Williams and E.O. Wilson—with being so dumb.

For the grounds of my suspicion, see the notes I made on my 2003 trip to the state. Sample:

I don't mean to imply that college football is a religion. As one Alabama friend replied when I suggested this comparison: "No, it's more important than that ..."

I omitted to record my impressions of the Bear Bryant Museum in Tuscaloosa , which I think is not much smaller than the Smithsonian and whose general interior ambience reminded me of the Sistine Chapel.

3.  The Ukraine.  From a very seriously disappointed listener:

Since you began your war against "the" country names, I have become a fanatical devotee to your cause. I even suffered strange looks from others by using "Czechia," such is my zeal to eliminate this definite article from all nations. I was therefore horrified to hear you call Ukraine "The Ukraine" in your most recent Radio Derb. [At 14m55s here.]

I work with someone from that great nation and whenever I am compelled to mention it by name, I always take the utmost care to omit the "the." This has taken significant practice on my part which I fancy my colleague appreciates very much; though they've never said as much. I'm sure they would be most distressed to learn of your indiscretion. As I know you are a good man and mean no good men ill, I will refrain from mentioning this to my colleague.

I trust you will be more careful in future!

Thank you, Sir. I am grateful for the correction. Homer nods, and so do I. I have alerted the VDARE.com editors to the issue so that similar lapses in the future have a better chance of being caught before publication. DROP THE "THE"!