From The Derb Email Bag: Brainteaser Solution, Swedish Ethnomasochism, And The 100th Archbishop Of Canterbury

Just a few arising from my July Diary.

(2) A Ramsey story. This is not Frank Ramsey, though; it's his younger brother Michael, who, as noted in my Diary, became the 100th Archbishop of Canterbury. 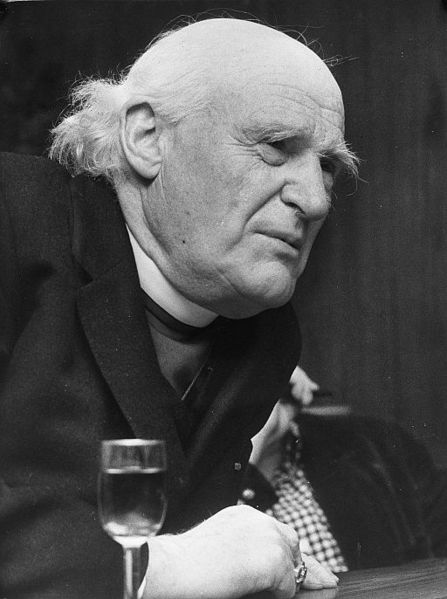 The reader who sent me this hails from Wisconsin. In the Lake Country of Waukesha County out west of Milwaukee is Nashotah House, a seminary of the Episcopal Church. My reader heard this story from a seminarian thereof.

When Abp. Michael stepped down from Canterbury, he came to Nashotah House to teach for a year and to get out of the way for his successor in the UK.

Like many Englishmen, he was a great walker, and he liked to walk the country lanes for miles around Nashotah House, particularly early in the morning.

One morning he was found by a sheriff's deputy, tottering along one of the back roads early in the morning. Because he was elderly and appeared a bit unsteady, possibly lost or drunk, the deputy stopped him to check up on him.

The deputy asked, "Who are you?" to which the reply was "I'm the Archbishop of Canterbury."

The deputy thought: "Oh, boy, I've really got a live one this time!"

Swedish history offers much food for thought to those of us interested in national character and stereotypes. At least I think it does, working from a very low base of information. My mental picture of Swedish history:

17th century: kick-butt hell-raisers, the terror of Europe (well, the northeastern bit) until Peter the Great gave them a hearty whupping.

Well, ethnomasochism, yes. The independent Swedish news outlet "Samhällsnytt" (Community news) questioned Swedes near Stockholm a few days ago. There is a 6m14s video clip here. Unfortunately there are no English subtitles; but one of my readers did a translation. The last 40 seconds show some talking head telling us what to think about the foregoing; I don't have a translation for that part.

The dramatis personae here are the interviewer, who I denote by "Q," and nine respondents identified by distinguishing features following "M" for male, "F" for female, with absolutely no offense at all intended towards persons of other sexes. ("Genders," whatever. "Perdaughters," whatever...) "T" is for "T-shirt."

Q: According to Pew Research, studies say that Swedes will become a minority in their own country. What do you think about that?

Q: Ethnic. And it's Pew Research that says this.

F (sunglasses): Aha. Well, I think it's hard to comment on that because I think it's ... I don't believe it, really.
——
F (cap): I guess it's a natural development, so to speak. And then Swedes will make their way out in the world as well, so ... it will end up with a mixture everywhere, I guess.
——
M (gray beard): As long as Sweden consists of people, I have no problems with that.
——
Q: Do you live in a Swedish or multicultural area?

Q: What is your experience with that?

M (bald): Yes, it's Swedish. We are neighbours. It's very Swedish there.

Both. Yes, it's homogenous.

F (cap): Yes, I would say that. I have lived a lot abroad and such, so it's like, nothing new there. (Laughs.)
——
M (gray beard): Absolutely.
——
Q: You say that you like multiculture and that, but you yourselves live  far from it, and studies show that there's many who ... so ... could it be so that people claim something politically correct, but in reality they do the opposite?

M (Dr. Strange T): Well, it is like this, one needs an ideological bedrock to stand on, as it were, and my absolute conviction, like, that is that, like, humans have, in their inborn human worth, full freedom and right to move wherever one wants on this earth, and that is, like, my deep rooted, absolute conviction, as it were, in the humanistic perspective. But still I can admit, indeed, I don't associate with particularly many non-Swedes, I don't have many friends that come from a different culture. I don't visit many other areas, as it were, now one is old and comfortable too, like, and most at ease at home, as it were. But it's still like this, like, one has the right to have a, like — I don't know if you can call it politically correct, but — it's more that one has an inbuilt conviction, ideology. And mine is all humans' equal worth and freedom to move all over the earth, like. I don't want borders or countries or things like that, really.

Q: Do you lock the door when you return home?

M (Dr. Strange T): Yes and no. I try to remember it, otherwise insurance wouldn't apply, should there be a burglary and things like that.

M (Dr. Strange T): Yes, absolutely not because I want to exclude something, no it's more an insurance question, it is ingrained, should a burglary occur, and one hasn't locked, police lock and top lock, like, then you won't get anything back from the insurance.
——
F (sunglasses): Where one lives isn't only based on that decision, I don't think that one needs to ... that one needs to view it as just political correctness, maybe one needs to live close to one's work, or something ... so I don't think that it's just that which matters.
——
Q: Could it be that people voice something politically correct, but in reality they do the opposite?

M (ponytail): Yes, of course. Swedes are pretty phony, in that respect.

M (ponytail): It is so ("Bruke be tiatri" — unintelligible) — a feeling one has.

M (black T): Everyone is a bit, everyone is a bit, yes yes yes.
——
F (cap): Absolutely, this is PC Sweden, there are so many ... like, there are extremely many racists in Sweden ... ehm, regretfully. And there are many who maybe want to be seen as something else, but ...
——
Q: Why is it like that?

F (bare shoulders): No, because one wants to ... I think that ... it's easy to say this and that, but later, when one is put on the spot and wants to ... then it is .. one wants to ... one wants to do everything, for one's children for instance, that they'll have the right friends, one wants them to grow up in the right way and don't be led astray, and then one thinks that one, like, has a justification in that respect.
——
M (gray beard:) I think that many people would like to show the better side of oneself, but everyone has a better and a worse side, and one says what one thinks is proper for the situation, so ... in a certain respect, yes.
F (sunglasses): Where one lives isn't only based on that decision, I don't think that one needs to ... one needs to view it as just political correctness, maybe one needs to live close to one's work, or something ... so I don't think that it's just that which matters.
——
M (red beard): I find it hard to relate to that, find it hard to relate, why that should be seen as, like, something negative.
——
F (bare shoulders): If one doesn't have children ... then one ends up ... then ... we need people, and new taxpayers are needed, so who the hell works and pays taxes, I couldn't care less.
——
F (sunglasses): But I don't know if it matters that much to those who come here, and integrate, and live here as Swedes as well, so I don't look upon that as something ... I don't know ... something that seems important to consider, in that sense, I don't know.