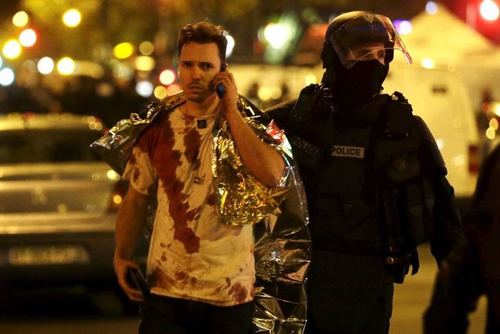 From "The Annals of Bad Timing:" David Brooks on "G.O.P. at an Immigration Crossroads"

The G.O.P. at an Immigration Crossroads

It’s no exaggeration to say that the next six months will determine the viability of the Republican Party. The demographics of this country are changing. This will be the last presidential election cycle in which the G.O.P., in its current form, has even a shot at winning the White House. And so the large question Republicans must ask themselves is: Are we as a party willing to champion the new America that is inexorably rising around us, or are we the receding roar of an old America that is never coming back?

Within that large question the G.O.P. will have to face several other questions.

The first is: How is 21st-century America going to view outsiders? For Republicans in the Donald Trump camp, the metaphor is very clear: A wall. Outsiders are a threat and a wall will keep them out.

Republicans in the Jeb Bush camp have a very different metaphor. As Bush and his co-author Clint Bolick wrote in their book, “Immigration Wars,” “When immigration policy is working right it is like a hydroelectric dam: a sturdy wall whose valves allow torrents of water to pour through, creating massive amounts of dynamic energy.” Under this metaphor the outside world is not a threat; it’s a source of creativity, dynamism and perpetual renewal.

The second question Republicans have to ask is: Can the party see reality? … Some Republican leaders simply lack the ability or willingness to acknowledge reality. Deporting 11 million people is not reality. Building a physical wall across the southern border is not reality. …

… In the realm of immigration, the first conclusion any pragmatist draws is that it’s ridiculous to say we just need to start enforcing the laws. The problem, as Bush has argued, is that the laws are dysfunctional. The whole system is wildly broken and it would cause massive dislocation if the rules were actually enforced. The system needs to be reformed.

The other conclusion any pragmatist draws is that for political and practical reasons, the whole system has to be reformed comprehensively and at once. You can’t do anything effective unless all the pieces fit together. As Bush and Bolick argued in their book, “A goal of sealing the border is hopeless without creating an immigration pipeline that provides a viable alternative to illegal immigration.”

On all these levels, the Republican Party faces a crossroads moment. Immigration is the key issue around which Republicans will determine the course of their party.