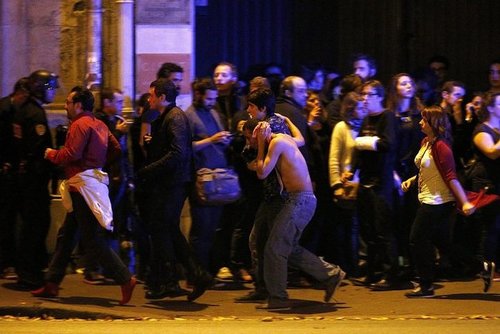 Who Did It? (The Answer Involves "Refugees")

PARIS — Three teams of Islamic State attackers acting in unison carried out the terrorist assault in Paris on Friday night, officials said Saturday, including one assailant who may have traveled to Europe on a Syrian passport along with the flow of migrants.

As the death toll rose to 129 — with 352 others wounded, 99 of them critically — a basic timeline of the attacks came into view.

… The man with the Syrian passport — which Greek officials said had been registered at the Aegean island of Leros on Oct. 3 — was 25, and died at the stadium. Another assailant, who died at the concert hall, was 29 and a native of Courcouronnes, about 20 miles south of Paris. He had a criminal record and was known to be involved in extremist Islamic ideology, Mr. Molins said.

The hunt for possible accomplices of the terrorists gained steam on Saturday. Officials in Belgium announced three arrests, one of them linked to a rental car found in Paris. In Germany, the police were exploring whether a man they arrested last week with weapons in his car and his GPS navigator set for Paris was linked to the attacks. But it remained unclear how a plot of such sophistication and lethality could have escaped the notice of intelligence agencies, both in France and abroad.

As Mao said, “The guerrilla must move amongst the people as a fish swims in the sea.”

The possibility that one of the attackers was a migrant or had posed as one is sure to further complicate the already vexing problem for Europe of how to handle the unceasing flow of people from Syria, Iraq, Afghanistan and elsewhere. It could also lend weight to the xenophobic arguments of right-wing populists like Marine Le Pen, the leader of the National Front party, who on Saturday held a news conference to declare that “France and the French are no longer safe.”

Mr. Hollande actively stepped up French participation in the military air campaign in Syria at the end of September. …

The death toll far surpassed that of a massacre at the satirical newspaper Charlie Hebdo and related attacks by Islamic extremists around the French capital in January. Friday’s attacks were the deadliest in Europe since the 2004 train bombings in Madrid, which killed 191 people. …

… Bertrand Bourgeois, 42, an accountant, was lost in thought as he cast a fishing line beneath the Invalides bridge.

He normally avoids fishing in Paris, he said, preferring quieter sections of the Seine near his home in Poissy, a northwest suburb. But after the violence, he said he felt drawn to come into the city out of a sense of solidarity.

Although his wife asked him to stay home, “something in me felt like it was important to be here, to say ‘still alive,’ ” Mr. Bourgeois said.

“I feel sickened, angry,” he said. Coming so soon after the attacks in January, he said, “It is starting to be too much.” …

Is “Bertrand Bourgeois” a real name or one the French gentleman chose symbolically?

Chancellor Angela Merkel of Germany gave an emotional national address on Saturday pledging solidarity with the French government and people, and calling on all Europeans to stand together in defiance of an attack on the liberties the Continent represents.

“We, your German friends, we are so close with you,” said Ms. Merkel, dressed in black. “We are crying with you. Together with you, we will fight against those who have carried out such an unfathomable act against you.”

“Those who we mourn were murdered in front of cafes, in restaurants, in a concert hall or on the open street. They wanted to live the life of free people in a city that celebrates life,” she said, her voice breaking. “And they met with murderers who hate this life of freedom.”