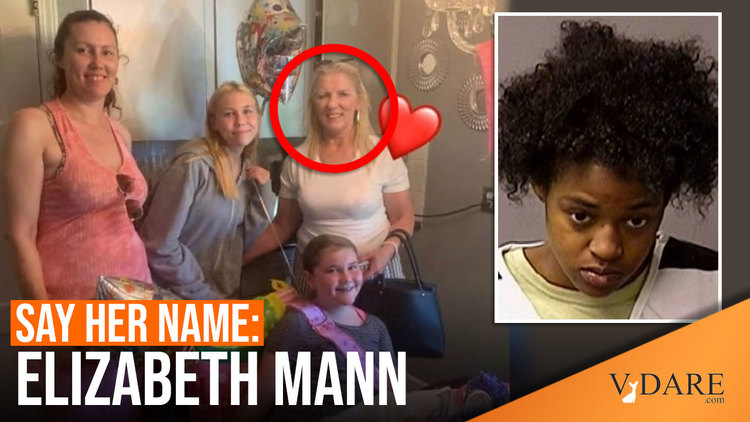 Her Name Is Elizabeth Mann: White Grandmother Of 8 And Mother Of 3 Murdered In Attempted Carjacking By Black Female

Her name is Elizabeth Mann, a white grandmother of 8 and mother of 3. She was murdered in an attempted carjacking by a black female.

Were white privilege, systemic inequality and implicit bias a reality, we’d all know what happened to Elizabeth Mann (she was murdered by a black female teenager in a “carjacking gone wrong”).

The woman who was gunned down during an attempted carjacking outside an Executive Inn in rural Stanislaus County was a mother of three and grandmother of eight, her family told CBS13 on Monday.

The family identified the woman killed as 60-year-old Elizabeth Mann of Tracy. They called Mann generous enough to give a person the last dollar out of her pocket.

Cherri Booth ​was a guest at the inn and saw the aftermath of the violence as the Mann’s son rushed outside.

“It just breaks my heart because that trickled down to all of her children, grandchildren. It’s so not fair,” Booth said.

Deputies arrested Tierra Davis, 18, who was booked into the Stanislaus County Jail on charges related to the homicide and attempted carjacking.

At around 1 a.m. Sunday, deputies responded to reports of shots fired along the 7100 block of McCracken Road in Westley. Multiple callers reported the shooting. Now, investigators are looking into possible connections to a larger crime spree spanning Stanislaus and San Joaquin counties.

Right now, Stockton police are investigating whether or not Davis is the same suspect who allegedly carjacked and shot a man multiple times near Center and First streets less than an hour before the motel shooting.

Investigators said it’s believed Davis was also involved in a crash on I-5 with the car related to the carjacking in Stockton.

Booth said she prays for Mann’s family and wonders why an 18-year-old would resort to such violence.

“I don’t know what her motive was or why she felt so desperate that she had to kill someone. She could’ve taken off in the car,” she said.

“I don’t know what her motive was…,” is the quote from an individual who refuses to connect to the dots of Critical Race Theory, 1619 Project, and the George Floyd insanity, where every problem black individuals face is automatically blamed on all white people.

Her name is Elizabeth Mann.