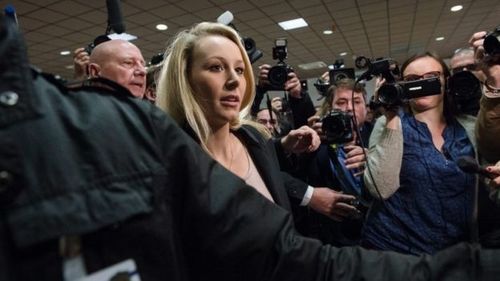 Sarkozy's The Republicans and center-right allies took 57.5 percent of the vote in the northern region against Le Pen's 42.5 percent, the Ifop Fiducial poll for iTELE, Paris Match and Sud Radio showed…

In the southeast, another FN target where Marechal-Le Pen was the FN's lead candidate, the conservatives scored 54.5 percent and the FN 45.5, the poll said.

In the eastern region, where the Socialists did not withdraw but where the FN also did well in the first round, the center right won 48.4 percent against the FN's 36.4 percent, according to a separate poll by TNS-Sofres-One Point.

It’s basic median voter theorem: in a two party race, it’s hard for the right to beat the center-right.

...calling the strong FN showing a "warning sent to all politicians, ourselves included, in the first round…We now have to take the time for in-depth debates about what worries the French…” he said, citing Europe, unemployment, security and identity issues.

Surprisingly, despite a tendentious headline, the dogmatically leftist BBC allowed a penetrating and astute comment by their Paris correspondent, Hugh Schofield

But in a way that suits her fine.

Because what it all means is that nothing in France has changed. The two main parties continue sharing out the goodies (in this case deliberately conniving to keep hers as well).

Marine's prospects for power may be limited, but her appeal is as strong as ever for France's growing numbers of disgruntled and disaffected.

That French "ouf" of relief? It's also the noise you make when you get a fist in the abdomen.

Quite likely this will cost Schofield his job.