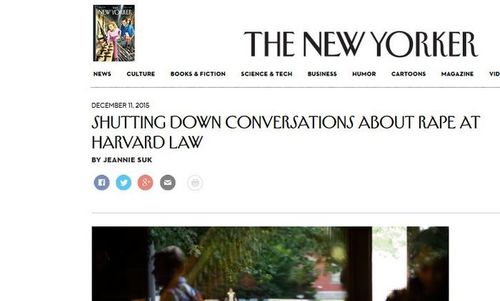 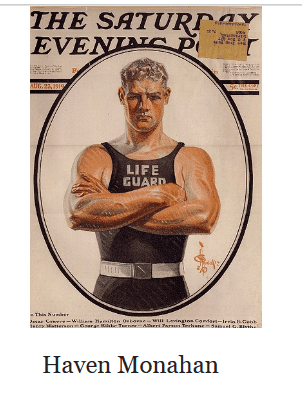 As we all know, the Campus Rape Crisis is due to white fraternity boys like U. of Virginia lifeguard Haven Monahan. Except, despite all the rules mandating counting race and rape on campus, nobody ever releases any figures about the racial makeup of college men accused of rape.

Shutting Down Conversations About Rape at Harvard Law

This is a piece on a subject about which I may soon be prevented from publishing, depending on how events unfold. Last month, near the time that CNN broadcast the documentary “The Hunting Ground,” which focuses on four women who say their schools neglected their claims of sexual assault, I joined eighteen other Harvard Law School professors in signing a statement that criticized the film’s “unfair and misleading” portrayal of one case from several years ago. A black female law student accused a black male law student of sexually assaulting her and her white female friend. The accuser, Kamilah Willingham, has graduated from the law school and is featured in the film. The accused, Brandon Winston, who spent four years defending himself against charges of sexual misconduct, on campus and in criminal court, was ultimately cleared of sexual misconduct and has been permitted to reënroll. The group that signed the statement, which includes feminist, black, and leftist faculty, wrote that this was a just outcome. …

But last week the filmmakers did more than understandably disagree with criticism of the film, which has been short-listed for the Academy Award for best documentary. They wrote, in a statement to the Harvard Crimson, that “the very public bias these professors have shown in favor of an assailant contributes to a hostile climate at Harvard Law.” The words “hostile climate” contain a serious claim. At Harvard, sexual harassment is “unwelcome conduct of a sexual nature,” including verbal conduct that is “sufficiently persistent, pervasive, or severe” so as to create a “hostile environment.” If, as the filmmakers suggest, the professors’ statement about the film has created a hostile environment at the school, then, under Title IX, the professors should be investigated and potentially disciplined.

Professor Suk goes on to argue that the current campus atmosphere of Always-Believe-the-(self-proclaimed)-Victim is disproportionately bad for black men:

It is as important and logically necessary to acknowledge the possibility of wrongful accusations of sexual assault as it is to recognize that most rape claims are true. And if we have learned from the public reckoning with the racial impact of over-criminalization, mass incarceration, and law enforcement bias, we should heed our legacy of bias against black men in rape accusations. The dynamics of racially disproportionate impact affect minority men in the pattern of campus sexual-misconduct accusations, which schools, conveniently, do not track, despite all the campus-climate surveys. Administrators and faculty who routinely work on sexual-misconduct cases, including my colleague Janet Halley, tell me that most of the complaints they see are against minorities, and that is consistent with what I have seen at Harvard. The “always believe” credo will aggravate and hide this context, aided by campus confidentiality norms that make any racial pattern difficult to study and expose.[Emphasis added]

That’s not exactly transparent prose, so let me elucidate: what Professor Suk [Email her] has privately heard from professional campus rape experts and what she has seen at Harvard is that most of those accused of sexual assault don’t look like Haven Monahan, but are instead minorities. And the context of the paragraph suggests that a large fraction of this minority majority of accused student rapists are black.