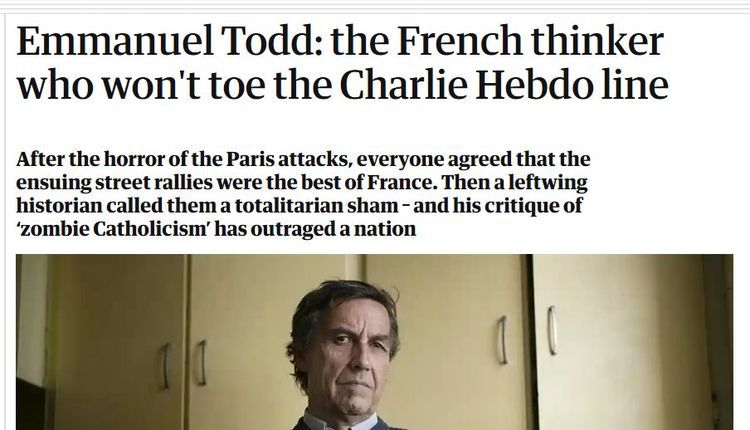 As you may have noticed, Europe is currently under siege from huge numbers of Middle Easterners and Africans, the parents of the next generation of car-be-que 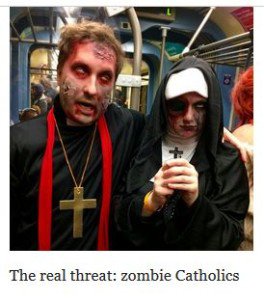 youths and kosher supermarket shooter-uppers, trying to move in. But that’s not the real problem, the real problem is that some natives, whose ancestors thought of Europe as “Christendom,” are not happy about this.

From The Guardian, an article about the new bestselling book Who Is Charlie? by French historian Emmanuel Todd, an expert on how family structures historically varied across Christendom, in which he sniffs out hereditary blood guilt even among pro-Charlie Hebdo demonstrators in favor of secularism.

After the horror of the Paris attacks, everyone agreed that the ensuing street rallies were the best of France. Then a leftwing historian called them a totalitarian sham – and his critique of ‘zombie Catholicism’ has outraged a nation

… Since then, the so-called “spirit of 11 January” – the date of the street rallies – has been seized upon by politicians as shorthand for all that is best and still great about France.

While the aftermath of the attacks has been bitterly contested, no one questioned the street rallies themselves, which were seen as sacrosanct: the one positive sign in one of France’s grimmest hours.

But then a leading French intellectual, the leftwing historian and sociologist Emmanuel Todd, lobbed what he called his own “magnificently crafted Exocet missile” at the nation, with a book arguing that the street rallies were a giant lie. The rallies, he argued, were not what they claimed to be – an admirable coming-together of people from different ethnic, religious and social backgrounds standing up for tolerance – but an odious display of middle-class domination, prejudice and Islamophobia. To Todd, they represented “a sudden glimpse of totalitarianism”. These “sham” demonstrations, he claimed, were made up of a one-sided elite who wanted to spit on Islam, the religion of a weak minority in France.

It’s fascinating how the reigning philosophical discourse in the 21st Century has become simply:

2. Puncher-uppers … good, even when they punch-up with AK47s against cartoonists and shoppers.

The Charlie Hebdo demonstration was not a great democratic rally, he says, but a moment of collective hysteria driven by xenophobic, authoritarian and nationalist impulses.

My understanding of French history (e.g., 1792) is that xenophobic, authoritarian, and nationalist ~ democratic.

Those who took to the streets came primarily from the privileged middle classes, taking advantage of the emotional shock that followed the killings in order to reaffirm their position of social domination and privilege.

The working class and the children of immigrants had been notably absent, he said. The most enthusiastic demonstrations, he decided, had occurred in the country’s most historically Catholic and reactionary regions, an affirmation of the middle class’s moral superiority and domination, and their Islamophobic quest for a scapegoat.

Well, sure, these French folks were demonstrating in favor of the aggressively secular Republic formalized by law in 1905, but the important point is that some of their great-grandparents had been against Col. Dreyfus and thus were on the losing side in 1905. You don’t wash out that kind of hereditary taint in just 110 years by giving up your religion and accepting your rivals’ ideology. You still have anti-Dreyfus genes in there somewhere. Corruption of blood can’t be atoned for that fast.

Todd’s massively contested and controversial book, Who is Charlie? – which is published in English next week – instantly became a bestseller and caused one of the biggest intellectual slanging matches of recent years, even by bruising French standards. …

Todd in turn likened Valls’s blind optimism about France to that of Marshal Pétain, the leader of France’s collaborationist Vichy regime in the 1940s. Who is Charlie? is now being published across the world with a preface warning that in all western societies “a Charlie lies slumbering” – a horrific event that cleaves society apart and sees the highly educated and well-off stick their heads in the sand. …

The furious row surrounding Todd’s book comes amid a wider soul-searching in France. After a fresh round of terror attacks in France – including a beheading and attempt to blow up a chemical plant near Lyon, and last week’s shooting on a high-speed train from Amsterdam to Paris – the question of what remains of that spirit of 11 January haunts the country.

Has France moved on? Or is it still in thrall to the unsettling fears that Charlie Hebdo’s attackers, the Kouachi brothers, ignited, despite the repeated breastbeating of politicians from the far-left to the far-right of the strength of the republican, secular ideal? As France came to terms with its national trauma, it was easier for politicians to focus on 11 January as one day of unity than the three fraught days between 7 and 9 January when two brothers who were once wards of the republic in children’s homes massacred some of the country’s best-known cartoonists as well as a Muslim policeman before finally being shot dead by police after a hostage-taking at a printer’s outside Paris. Their target, Charlie Hebdo, had long been under police protection after death threats over its caricatures of the prophet Muhammad.

The febrile atmosphere worsened when the brothers’ accomplice, Amedy Coulibaly, also French born and bred, touched the rawest of nerves by killing four people in a siege of a Paris kosher grocery store days after shooting dead a policewoman while reportedly on his way to attack a Jewish school.

The slogan “Je Suis Charlie” (I am Charlie) became a worldwide rallying cry but proved complex, and to some extent, excluding.

It didn’t fit with those who utterly condemned the shooting, but didn’t agree with the magazine’s caricatures of Muhammad. Scores of disrupted minute’s silences in schools, particularly in the restive banlieues, or suburbs, appeared to highlight the uneasy relationship between teenagers, often from immigrant minorities, and their teachers.

Amid this, the French government cracked down on speech “deemed to glorify terrorism”. A series of cases rushed through the courts resulted in heavy prison sentences, some handed down to people who were drunk. …

It was against that background that Todd launched his Exocet. He hadn’t gone on the 11 January rallies himself, although he knew the economist Bernard Maris, who was killed in the Charlie Hebdo attack.

But he said that when he opened the newspaper the next day and saw the maps of where rallies had taken place, he saw a pattern that infuriated him.

“Here was clear fraud. The street demonstrations were the self-glorification of the French middle class. That made me explode.”

He saw it as France refusing to look at the economic stagnation and deep inequality that might have led to the horror of the attacks.

Todd’s central argument is that there are fundamentally two Frances. There is a “central” France, including Paris and Marseille and the Mediterranean, where there is equality on the family level and a deep-rooted attachment to secular values of the French revolution and the republic.

Then there is a France of the periphery, for example, the west or cities such as Lyon, which has stayed true to the old Catholic bedrock, where people may no longer be practising Catholics, but they’re still infused with all the social conservatism of that Catholicism, its hierarchies and inequality. 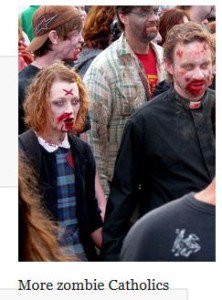 The Bad French are Zombie Catholics. Sure, they aren’t very Catholic anymore, but blood will tell.

Despite the row, he stands by the idea. “France is always double,” he says. “That’s why you never know if it will collapse or get back on its feet.” Todd, who comes from a cosmopolitan family of writers and is distantly related to the anthropologist Claude Lévi-Strauss,

Oh, okay, that explains a lot. As Todd always says (about other people), family ties explain a lot.

came to fame for predicting the fall of the Soviet Union in 1976 and more recently for suggesting the US is an empire in decline. He has long argued that family structures explain why people adhere to certain ideologies, and has pleaded for France to leave the euro. …

One of his key concerns is “the wave of Islamophobia” in France, which he says is echoed across the west. …

The maternal side of Todd’s family is Jewish. “This is probably the first time in my life that I’ve written a book as a Jew,” he said.

Todd is an expert about how family ties in Christendom explain current political views, but similar analysis of Jews is basically not done.

For example, the triple bankshot ideologies of Todd’s kinsman Levi-Strauss, along with those of Marx and Freud, were subjected to an intentionally New York Jewish intellectual-style analysis in the 1974 book The Ordeal of Civility by Irish-American New York academic John Murray Cuddihy.

But you’ve probably never heard of that book because a gentile analyzing hugely influential Jews qua Jews is unimaginable. Jewish intellectuals very much do not like their own tools being applied to themselves. Turnabout may be fair play, but it’s, to be frank, zombie Catholicism.

When a young gunman Mohamed Merah opened fire outside a Jewish school in Toulouse in 2012, killing four, Todd put the antisemitic element to the back of his mind; likewise when a French gunman killed four at the Jewish museum in Brussels last year. But with the attack on the kosher grocery store, which he feels has been overshadowed by the Charlie Hebdo killings, he said antisemitism was clearly at crisis point.

All of these were massacres of Jews perpetrated by Muslims. But the point is the massacrers were puncher-uppers, and the important thing is to find the would-be puncher-downers, who, oddly enough, usually turn out to be one’s hereditary enemies, and punish them for the sins of their great-grandfathers.

His theory is that the rise in Islamophobia is in turn stoking antisemitism in run-down suburbs, and that antisemitism is growing in the middle class.

Then again, a more disinterested observer might suggest that anti-Semitic Muslim massacres in Europe are stoking Islamophobia among average people. But average people — zombie Catholics — and their latent, hereditary anti-Semitism are the Real Danger.

Camp Of The SaintsCharlie Hebdo
<< Previous
Next >>
LATEST