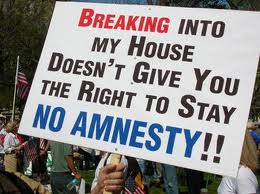 Amnesty And Illegal Aliens: Still About As Popular As Genital Herpes

Writing in April, 2004 about a recent conference organized by Pat Buchanan, Jared Taylor included his impressions from the talk given at the event by then-Congressman Tom Tancredo [R-CO]. Here's a memorable nugget:

[Tancredo] told about one Southern congressman who is a gynecologist and still has a practice. He got a big laugh when he imitated a thick Southern accent, and quoted his colleague: “I have done an informal poll of my patients and have found that amnesty is about as popular as genital herpes.”

Notably, that would have been an informal poll strictly among women, supposedly the softer-hearted sex (although in today's environment, one can't be sure).

A Spring 2015 survey that's also less-than-scientific—but with significant numbers behind it—reveals another aspect of illegal aliens' unpopularity among Americans. On August 7, in How Older Americans Would Fix Social Security, The Senior Citizens League reported that 82 percent of nearly 1,200 respondents favored "Prohibit[ing] payment of Social Security benefits that are calculated on earnings from unauthorized work by illegal immigrants who worked under fraudulent or invalid Social Security numbers." (Nine percent were opposed, and nine percent had no opinion.)

That was a substantially higher percentage of support than for any of the three next-most-popular options to buttress Social Security's finances; e.g. the corresponding percentages on the proposal to remove the cap on annual wages subject to Social Security taxes (currently $118,500) were 70, 7, and 23.

This survey wasn't scientific, as its participants were self-selected (see here and scroll down), but it consisted of a wide range of questions about Social Security and Medicare, and it clearly wasn't trolling for respondents who focus on immigration policy. (The inclusive dates of the self-selected survey aren't given, but we can conclude from this [scroll down] that it was made available to potential respondents on March 4, 2015.)