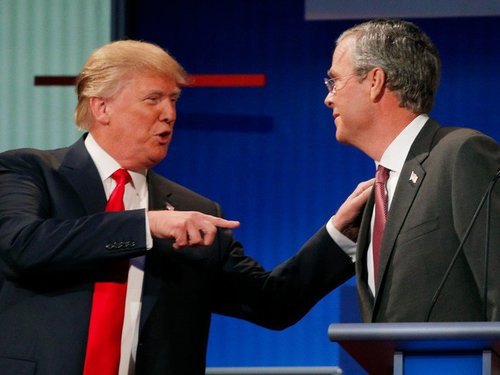 Former Florida Governor Jeb Bush is going after Donald Trump, calling him “abhorrent” for suggesting that Muslims in America should be registered.

“I find it abhorrent that Donald Trump is suggesting that we register people,” he said. “That haunts back to a time that no one wants to go back to.”

NBC’s Joe Kernen alluded to Trump’s comments around potentially forming such a database, referring to the past internment camps for Chinese-Americans [Sic] under President Roosevelt.

I think it’s funny that there are people young enough to make that mistake—who haven’t been indoctrinated with the story of the Japanese Internment during World War II. In fact, the Chinese of that period were allies of the US—it was subjects of the Empire Of Japan, and some of their relatives who were interned during World War II.

“You talk about internment, you talk closing mosques, you talk about registering people, that’s just wrong,” Bush replied. “I don’t care about campaigns.”

“It’s not a question of toughness. It’s manipulating people’s angst and their fears,” Bush said. “That’s not strength. That’s weakness.”

The main point you need to remember is that there is already registration for foreign residents. It’s called a Green Card. During the '90s, before Peter Brimelow was sworn in as a citizen, he used to receive a regular postcard from the Immigration and Naturalization Service to ask if he was still living at his registered address. (This "Alien Address Report Program" started in 1940, during World War II. Under Doris Meissner, Clinton’s head of Immigration Non-Enforcement, this stopped, like a lot of other things.)

After 9/11, the implementation, or rather re-implementation of such a system was one of the primary suggestions we got about what to do to prevent another terrorist attack—see Our Readers Advise The President… October 10, 2001.

George W. Bush didn’t listen, of course. He’s the guy who went to the Islamic Center of Washington six days after 9/11 to say “Islam is peace.” He, and his brother Jeb are also the guys who were raised in a family very friendly to Arabs.  (Saudi Ambassador Bandar bin-Sultan  was so friendly with the Bush Family that they called him, jokingly, “Bandar Bush”.)

But here’s the point—Trump is not really proposing anything new. He’s proposing, as with the Great Wall of Trump, and deportation, something old—the defense of the United States of America from its foreign enemies by methods which have been used in the past.

I met a patriotic immigration activist named Bob Park at a conference in 2006. He was an ex-Border Patrolman who had, as a young man, actually taken part in Operation Wetback. And he pointed out to me that Eisenhower hadn’t  needed to pass any laws.

Illegal immigration was already illegal, and deportation was the answer to the problem. All he need to do was order it done.  George W. Bush could have done the same, but he didn’t want to. Trump wants to.

American can also take measures to protect itself from Muslim immigrants, if the President wants to. Trump does, Jeb doesn’t.