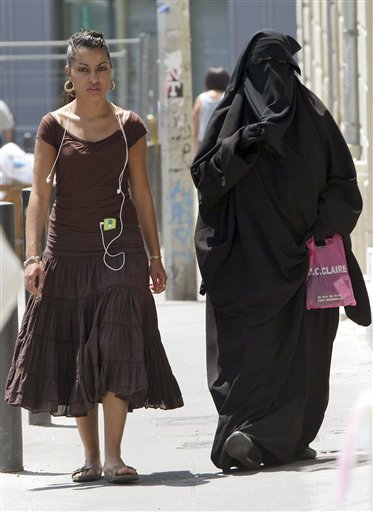 It has taken a long time to get through the slow political process, but France has done Western Civilization proud by outlawing the misogynous burqa from the public space.

Also admirable are the grassroots efforts of French people against encroaching Islam, like the pork and wine street parties that have sprung up via Facebook.

The burqa is an affront to Western values with its obliteration of women’s individual identity. The all-covering sacks are therefore the ideal garment for societies where polygamy is normal, and women are interchangeable marriage items.

The burqa is also a handy cloaking device for crime and terrorism, as Daniel Pipes’ ever-growing list proves: Niqabs and Burqas as Security Threats.

That threat is now removed from France. But why does America continue to coddle these misogynous immigrants?

(CNN) – France’s law banning the burqa and other Islamic face coverings in public places is legal, top constitutional authorities in France ruled Thursday, clearing the final hurdle before the ban goes into effect.

The ban passed both houses of the French legislature by overwhelming margins earlier this year, and is scheduled to come into effect in the spring.

The law imposes a fine of 150 euros ($190) and/or a citizenship course as punishment for wearing a face-covering veil. Forcing a woman to wear a niqab or a burqa will be punishable by a year in prison or a 15,000-euro ($19,000) fine, the government said, calling it ”a new form of enslavement that the republic cannot accept on its soil.”

A panel of French lawmakers recommended a ban last year, and lawmakers unanimously passed a non-binding resolution in May calling the full-face veil contrary to the laws of the nation.

”Given the damage it produces on those rules which allow the life in community, ensure the dignity of the person and equality between sexes, this practice, even if it is voluntary, cannot be tolerated in any public place,” the French government said when it sent the measure to parliament in May.

French people back the ban by a margin of more than four to one, the Pew Global Attitudes Project found in a survey earlier this year.

Some 82 percent of people polled approved of a ban, while 17 percent disapproved. That was the widest support the Washington-based think tank found in any of the five countries it surveyed.

Clear majorities also backed burqa bans in Germany, Britain and Spain, while two out of three Americans opposed it, the survey found.

Uh oh, big education effort still needed in this country on the issue.