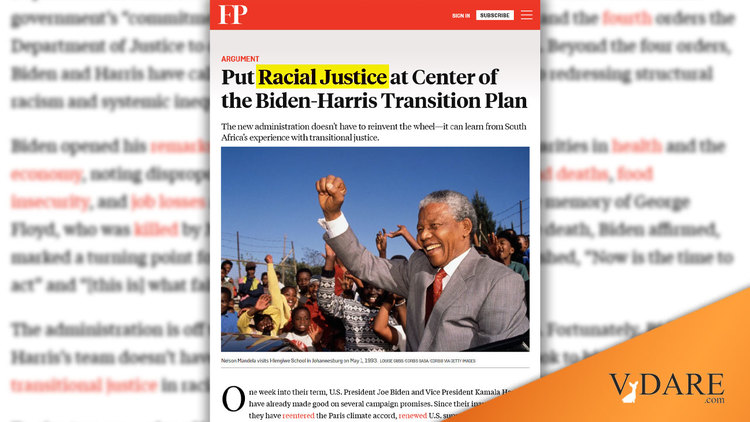 If you want a blueprint for where life in the USA is headed, look no further than Foreign Policy magazine, where they advocate implementing racial justice straight from the South Africa playbook.

One week into their term, U.S. President Joe Biden and Vice President Kamala Harris have already made good on several campaign promises. Since their inauguration, they have reentered the Paris climate accord, renewed U.S. support for the World Health Organization, and ended the Trump administration’s travel bans targeting nationals of select Muslim-majority and African nations. Racial justice is next on the list of issues that they have identified as most pressing and requiring action in their first 100 days.

The first executive order directs the Department of Housing and Urban Development to remedy racism in federal housing policy and practice, while the second instructs the Department of Justice to end contracts with private prisons. The third renews the federal government’s “commitment to tribal sovereignty and consultation” and the fourth orders the Department of Justice to combat anti-Asian racism and xenophobia. Beyond the four orders, Biden and Harris have called for a whole-of-government approach to redressing structural racism and systemic inequality.

Biden opened his remarks on Tuesday by acknowledging racial disparities in health and the economy, noting disproportionate rates of coronavirus infections and deaths, food insecurity, and job losses among Americans of color. He invoked the memory of George Floyd, who was killed by Minneapolis police in May 2020 and whose death, Biden affirmed, marked a turning point for the United States. The president admonished, “Now is the time to act” and “[this is] what faith and morality call us to do.”

The administration is off to a strong start, but it has a long way to go. Fortunately, Biden and Harris’s team doesn’t have to reinvent the wheel. Rather, they can look to historical cases of transitional justice in racially divided societies.

To give two examples of how transitional justice could work under a Biden-Harris administration—and the impact it could have on racial justice—consider policy reforms in South Africa during the transition from apartheid and white-minority rule to democracy and Black-majority rule in the mid-1990s.

After nearly 50 years of violence and discrimination against Black and other non-white South Africans, the first post-apartheid government, led by President Nelson Mandela and the African National Congress (ANC), undertook a range of reforms relating to housing and criminal justice. Parts of the Biden plan resemble these early initiatives.

Here’s what worked, what didn’t, and implications for the United States today.

First, Mandela and the ANC introduced several policies to redress discrimination in housing—from granting developer subsidies to ending redlining, the practice of denying housing loans to entire communities. At the time, the country faced a housing shortage of roughly 1.5 million units and a public housing system in shambles. To fill in the gaps, the new government relied heavily on private-sector investment and the work of non-governmental organizations.

But progress on these policies stalled. Government subsidies did not produce housing quickly enough and disagreement among local, provincial, and national governments further slowed momentum. What housing was developed was far from centers of economic opportunity. Above all, residents denounced the lack of community consultation in the process.

Twenty-six years after the fall of Apartheid and the implementation of racial/transitional justice, the South African Air Force (SAAF) has “no airworthy C-130 Hercules transports available.” Predictions are the SAAF will soon be an “air wing, rather than air force – with personnel but no assets.”

Once the SAAF had a proud history as one of the oldest air forces in the world, but prior to 1994, it was all-white. Thus, it can’t be celebrated. In post-Apartheid South Africa, racial justice (and extreme affirmative action with the SAAF) made the SAAF obsolete.

A nice warning to America for what’s coming as Foreign Policy advocates racial justice as the center of the transitional plan for Biden-Harris.