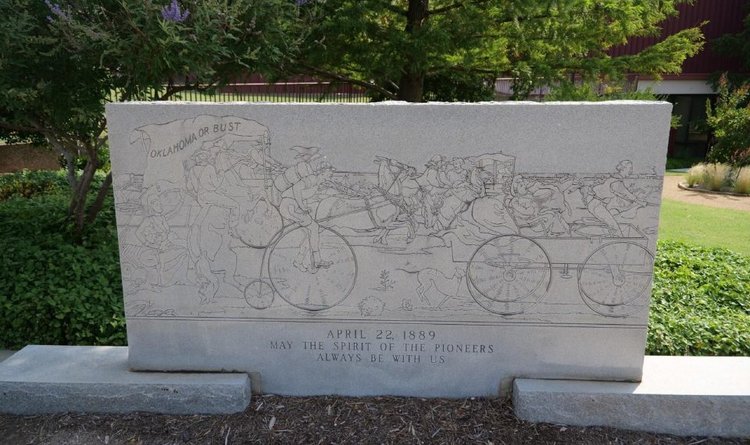 The land runs, which were actual races for land, are part of Oklahoma history. It's how a significant portion of the state was settled.

The first land run was in 1889, settling an area of central Oklahoma called "the Unassigned Lands," which was uninhabited and not belonging to any Indian tribe.  Click here to see it on a map.

That's the land run in which Oklahoma City was founded, jumping from a population of zero to 10,000 in one day.

In this era of Heritage Haters, the Land Runs are under attack.

As I reported in 2015, above, it is now forbidden to Oklahoma City schoolchildren to reenact the land runs, even though their city was founded by a land run.

Now, a monument at an Oklahoma City college has been removed.

A controversial Land Run monument is no longer on the Oklahoma City Community College campus.  The large concrete slab, visible outside the main building on campus, depicted those who came to Oklahoma for the Land Run of 1889 as heroes and innovators, OCCC officials said.
[Oklahoma City Community College removes controversial Land Run monument, by Destiny Washington, KTUL.com, January 26, 2021]

Click here for a photo of the monument in question.

Executive Vice President Danita Rose, whose maternal grandfather was of Cherokee descent, said that the decision to remove the monument was a top priority for the executive leadership team.

It's the old "I'm Cherokee" argument.   Like Elizabeth Warren.

Even if true, how is that relevant?   The land settled in the 1889 land run was not Cherokee land, had never been Cherokee land, and was never settled by the Cherokee.

And maybe Danita Rose, who claims Cherokee descent, isn't aware of this irony: It was Elias C. Boudinot, a prominent Cherokee, who suggested that the Unassigned Lands be opened to white settlement, and began campaigning for its opening ten years earlier, in 1879.

But back to Danita Rose and her historically ignorant whining:

“It was a no-brainer,” Rose said. “If our goal is to create a community that is inclusive and welcoming to everyone, a monument that depicts cruelty and oppression can’t be on display here.”

The Run of 1889  was not "cruelty and opporession"?  It's how Oklahoma City, was settled.

The monument, which officials said predates most current OCCC employees, was the subject of numerous complaints via social media, letters to the editor of the student-run Pioneer campus newspaper, and even generated threats of violence and protests, according to the news release.

So did nobody defend the monument?  And how about those "threats of violence and protests"?   Is that how we decide things nowadays?

Note too that the name of the campus newspaper is the "Pioneer."  They need to rename it the "Woke Zombie" or something like that.

OCCC officials said their faculty and staff know very little about the monument and have openly questioned its purpose on the campus. Senior administrators agreed it should go, and the monument was removed by OCCC Facilities Management and is in storage.

“We have always agreed with those who felt the monument was offensive and had no place on our campus,” OCCC interim President Dr. Jeremy Thomas said in a statement. “It does not accurately represent history, and it does not accurately reflect the respect, empathy, and admiration we have for the true pioneers of this land: the indigenous people of this country. As soon as we were in a position to take it down, we did.”

Is Dr. Thomas historically ignorant?  The Unassigned Lands were uninhabited.  The white  pioneers of 1889 were the people who settled it.

A bunch of state-employed PC whiners didn't create Oklahoma City.  It was those  very pioneers of 1889 who created it.

Once again, we see the destruction of American heritage  before our eyes.  And to be replaced with what?