The one benefit of today's healthcare socialization marathon was that it eclipsed the rally of thousands of hostile illegal aliens and their anti-American comrades in Washington. But what we saw was ugly enough.

Frustrated with the lack of action to overhaul the country's immigration system, tens of thousands of demonstrators rallied on the National Mall and marched through the streets of the capital Sunday, waving American flags and holding homemade signs in English and Spanish. [...]

One group from Queens, N.Y., displayed a giant papier-mache family — a mother and two crying children. The creation, meant to symbolize the way immigration problems have split up families, was the work of teenagers in an after-school program, said Natalia Aristizabal, arts and media educator for the group, Make the Road New York.

Indeed, illegal aliens apparently have lots of time for expressive art projects, such as the item pictured below. Such creative people.

(AP caption) Demonstrators shout as they punch an effigy of the Immigration Customs Enforcement ICE during a rally for immigration reform on the National Mall in Washington, on Sunday, March 21, 2010. 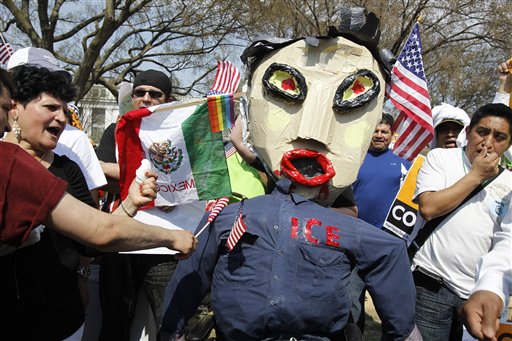 The aliens' behavior toward their crude effigy doesn't indicate much respect for the rule of law, but then neither did their manner of entering this nation.