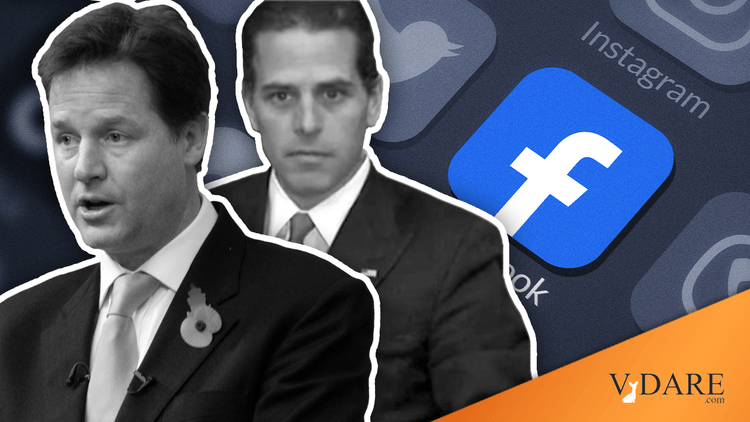 Nick Clegg was leader of the UK third party center-left Liberal Democrats from 2005-2017 and deputy Prime Minister to David Cameron from 2010-2015. He is currently cashing in big time as head censor for protecting his ideological counterpart Joe Biden at Facebook. From the Daily Mail:

Nick Clegg ‘was involved in Facebook’s decision to hush-up story about Joe Biden’s son’ that led to social media giant being branded the Democrat’s ‘PR team’ by Republicans
Nick Clegg is vice-president of global affairs and communications at Facebook
Facebook was accused of ‘acting as Joe Biden’s PR team’ by top Republicans
Decision to ‘reduce the distribution’ came before the US election on November 3
For moderation issues that hold political significance Sir Nick will look into it
It is not known who had the final say in the distribution of the Joe Biden story
By JEMMA CARR FOR MAILONLINE and JENNIFER SMITH FOR DAILYMAIL.COM

The social media firm was accused of ‘acting as Joe Biden’s PR team’ by top Republicans for hushing up the story just days before the US election on November 3.

Sir Nick, who left the UK government in 2015, is now the vice-president of global affairs and communications at the social media giant.

The Post story alleges that Biden met with a Ukrainian businessman in 2015 – when the businessman was paying his son Hunter $50,000-a-month.

Months later, Biden – then the US Vice President – pressured Ukrainian officials into firing a prosecutor who was investigating the businessman, it claims.

Facebook announced on Wednesday that it had started ‘reducing distribution’ of the New York Post’s story until their army of third-party ‘fact checkers’ had vetted it.

Most of Facebook’s decisions are made by automatic software – or by moderation staff, The Daily Telegraph reports.

But, for sensitive moderation issues that hold cultural or political significance, Facebook’s vice-president of content policy, vice-president of global public policy and then Sir Nick look into the case as it passes up a chain.