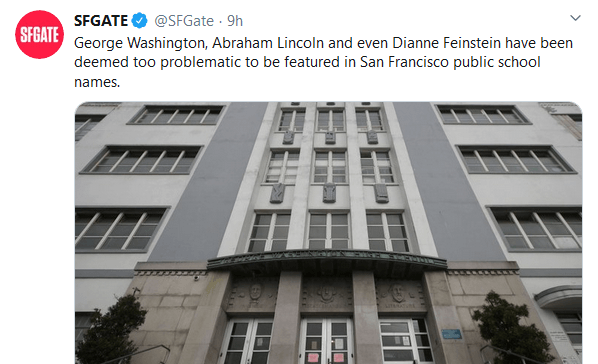 Despite its vast wealth, San Francisco has notoriously awful public schools with low test scores. But don’t worry, the school board has a plan to fix the badness of its schools: the rectification of names. From SFGate.com:

George Washington, Abraham Lincoln and even Sen. Dianne Feinstein have been deemed too problematic to be featured in the names of schools in the San Francisco Unified School District by a panel of 12 community members appointed by the superintendent.

Three weeks ago, the panel found that 44 of the 125 schools in the district might have to change their names after their review. KGO reported that panel members sought to rename schools currently featuring the names of, "anyone directly involved in the colonization of people, slave owners or participants in enslavement, perpetrators of genocide or slavery, those who exploit workers/people, those who directly oppressed or abused women, children, queer or transgender people, those connected to any human rights or environmental abuse [and] those who are known racists and/or white supremacists and/or espoused racist beliefs."

The Chronicle reported Wednesday that parents and principals were formally asked this week to brainstorm potential new names by Dec. 18, a move that was not well-received given the fact that schools are still in distanced learning due to the ongoing coronavirus pandemic. The school board will then vote on any potential name changes in January or February of 2021....

Schools named after former presidents George Washington and Thomas Jefferson are on the list due to the two presidents’ slave-owning status, and a school named after Abraham Lincoln is on the list because of his treatment of Native Americans.

Dianne Feinstein Elementary School made the list because she reportedly replaced a vandalized Confederate flag flying outside City Hall when she was mayor in 1984. Progressives have recently been irate at Feinstein after her embrace of South Carolina Sen. Lindsey Graham at the end of the Amy Coney Barrett Supreme Court nomination hearings.

Also on the list is El Dorado Elementary School, because panel members took issue with the concept of El Dorado.

“The concept of El Dorado, especially in California, had a lot to do with the search of gold, and for the indigenous people that meant the death of them,” panel member Mary Travis Allen said during a September meeting. “I don’t think the concept of greed and lust for gold is a concept we want our children to be given.”

Here are the evil 44 school names, with descriptions of the more obscure sources:

He originally wanted to build giant statues of himself and his parents, and erect a pyramid larger than the Great Pyramid of Giza in his own honor in downtown San Francisco. However, through the efforts of George Davidson, president of the California Academy of Sciences, Lick was persuaded to leave the greatest portion of his fortune to the establishment of a mountaintop observatory, with the largest, most powerful telescope yet built by man.