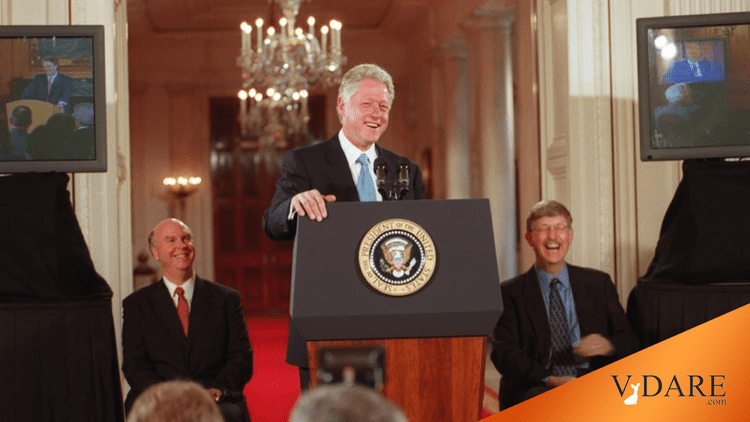 The Human Genome Project: It Was Twenty Years Ago Today

Bill Clinton’s ceremony in the White House Rose Garden on June 26, 2000 celebrating the “completion” of the Human Genome Project was one of the more influential milestones in both the overselling of genetic knowledge as the key to rapid advancement of medicine, and the concoction of the conventional wisdom that Science Has Proved that Race Does Not Exist.

Reading through the transcripts, it strikes me that giving entrepreneur Craig Venter the anchorman spot in the lineup is what caused so many to remember Clinton and Francis Collins as also endorsing the new dogma, even though their remarks were blander and more ambiguous. It’s Venter who bears the greatest blame for the Race Does Not Exist Genetically know-nothingism of the 21st Century.

Remarks Made by the President, Prime Minister Tony Blair of England (via satellite), Dr. Francis Collins, Director of the National Human Genome Research Institute, and Dr. Craig Venter, President and Chief Scientific Officer, Celera Genomics Corporation, on the Completion of the First Survey of the Entire Human Genome Project

THE PRESIDENT: … We are here to celebrate the completion of the first survey of the entire human genome. Without a doubt, this is the most important, most wondrous map ever produced by humankind.

.. It was not even 50 years ago that a young Englishman named Crick and a brash even younger American named Watson, first discovered the elegant structure of our genetic code. Dr. Watson, the way you announced your discovery in the journal Nature, was one of the great understatements of all time. “This structure has novel features, which are of considerable biological interest.” (Laughter) Thank you, sir. (Applause)

James D. Watson hadn’t been canceled yet, so he was there in a place of honor that day.

… And we must guarantee that genetic information cannot be used to stigmatize or discriminate against any individual or group.

… All of us are created equal, entitled to equal treatment under the law. After all, I believe one of the great truths to emerge from this triumphant expedition inside the human genome is that in genetic terms, all human beings, regardless of race, are more than 99.9 percent the same.

What that means is that modern science has confirmed what we first learned from ancient fates. The most important fact of life on this Earth is our common humanity. …

Now, it is my great pleasure to turn to my friend, Prime Minister Tony Blair …

And, on a personal note, I can’t help but think that the year of your son’s birth will always be remembered for the remarkable achievements we announce today. I think his life expectancy has just gone up by about 25 years. (Laughter)

Clinton and Blair then yapped for a while about globalism. Then Francis Collins of the government effort came on:

DR. COLLINS: … So there is much to celebrate. But I have to tell you that this morning is also a bitter-sweet experience for me, personally. Less than 24 hours ago, I attended the funeral of my beloved sister-in-law, a wonderful marionette artist who brought magic and joy to thousands of children with her art. She died much too soon of breast cancer. The hope and promise of understanding all of the genes in the genome and applying this knowledge to the development of powerful new tools came just too late for her.

How are we doing on curing cancer through genetics anyway? It can’t hurt … but it sure hasn’t been a quick home run like many thought 20 years ago. It’s almost as if your genes didn’t evolve to kill you.

… I particularly welcome the opportunity to celebrate this moment jointly with our scientific colleagues at Celera Genomics, and I wish to express my personal gratitude to Dr. Craig Venter for his openness in the cooperative planning process that led to this joint announcement. I congratulate him and his team on the work done at Celera, which uses an elegant and innovative strategy that is highly complementary to the approach taken by the public project. Much will be learned from a comparison of the two.

I’m happy that today, the only race we are talking about is the human race. (Applause)

The last line was actually a joke about the stressful competition between Collins’ slow-moving government behemoth and Venter’s more nimble private venture. But I suspect a lot of people took it to mean that Race Does Not Exist, especially after Venter’s speech:

DR. VENTER: … The method used by Celera has determined the genetic code of five individuals. We have sequenced the genome of three females and two males, who have identified themselves has Hispanic, Asian, Caucasian or African American. We did this sampling not in an exclusionary way, but out of respect for the diversity that is America, and to help illustrate that the concept of race has no genetic or scientific basis.

In the five Celera genomes, there is no way to tell one ethnicity from another.

This might have been the most influential (and dumb-downing) sentence of the whole whoop-tee-doo.

Obviously, today we have an entire industry devoted to telling you what your ancestral ethnicities are down to 3 significant digits. But a huge number of people don’t seem to have noticed that what they took on faith on June 26, 2000 was almost immediately rendered ridiculous.

Ironically, Dr. Venter was mostly lying, both on the macro level and the micro level: The first human genome mapped was actually largely his own. From the New York Times two years later:

When scientists at Celera Genomics announced two years ago that they had decoded the human genome, they said the genetic data came from anonymous donors and presented it as a universal human map. But the scientist who led the effort, Dr. J. Craig Venter, now says that the genome decoded was largely his own.

Society and medicine treats us all as members of populations, where as individuals we are all unique, and population statistics do not apply. …

I would like to particularly acknowledge Charles DeLisi from the Department of Energy, and Jim Watson from Cold Spring Harbor, both here, for their vision in helping to initiate the Genome Project. …

The genome sequence represents a new starting point for science and medicine, with potential impact on every disease. Taking the example, cancer, each day approximately 2,000 die in America from cancer. As a consequence of the genome efforts that you’ve heard described by Dr. Collins and myself this morning, and the research that will be catalyzed by this information, there’s at least the potential to reduce the number of cancer deaths to zero during our lifetimes.

How’s that working out anyway? Dr. Venter is still alive at 73, so it could happen.

… However, I am concerned, as many of you are, that there are some who will want to use this new knowledge as a basis of discrimination. A CNN-Time poll this morning reported that 46 percent of Americans polled believe that the impact of the Human Genome Project will be negative. We must work together toward higher science literacy and the wise use of our common heritage.

I know from personal discussions with the President over the past several years, and his comments here this morning, that genetic discrimination has been one of his major concerns about the impact of the genomic revolution. While those who will base social decisions on genetic reductionism will be ultimately defeated by science, new laws to protect us from genetic discrimination are critical in order to maximize the medical benefits from genome discoveries. …

THE PRESIDENT: Well, thank you both for those remarkable statements. I suppose, in closing, the most important thing I could do is to associate myself with Dr. Venter’s last statement. When we get this all worked out and we’re all living to be 150 — (Laughter) — young people will still fall in love, old people will still fight about things that should have been resolved 50 years ago — (Laughter) — we will all, on occasion, do stupid things, and we will all see the unbelievable capacity of humanity to be noble. This is a great day.

Thank you very much. (Applause)