Yesterday a Hispanic gunman, who may have been mentally ill, shot up the usual unarmed school crowd in Florida. There were over 130 adults (teachers, staff) on the premises who were legally entitled to carry guns under Florida law, but barred from doing so under the Federal Gun-Free Schools Act.

This caused Hispanic Voxsplainer German Lopez to issue the most bogus "Trump lied" claim ever.

Trump’s Florida shooting speech was one giant lie by omission

Of course, the President has taken a position on gun control in the campaign—he's against it. His voters are against it, his party (which controls both houses of Congress) is against it, and the Supreme Court  is against it.

It's political suicide for a Democrat to run on it, let alone someone like Trump. So he's not ignoring it, he's rejecting it with contempt.

If you want to see an example of a "giant lie by omission," try this German Lopez story, which appeared in Vox in July of last year:

Minneapolis police shot an unarmed woman in her pajamas. They haven’t explained why.
The officers had body cameras when they shot Justine Damond — but didn’t turn them on.
Updated by German Lopez@germanrlopezgerman.lopez@vox.com Jul 17, 2017, 7:31pm EDT 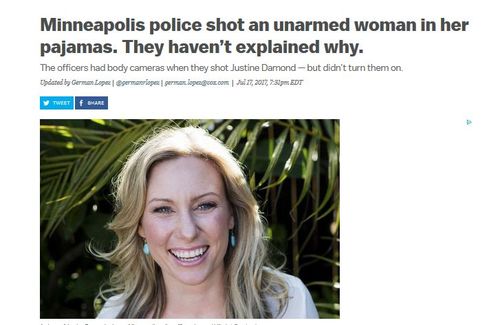 Steve Sailer blogged about it under the headline: VOX Posts 2000 Word Article on Minneapolis Police Shooting Without Mentioning Name of the Cop. And then it goes on for 2000 words without ever mentioning the name or ethnicity of the cop who shot the unarmed blonde lady wearing pajamas who had come out to tell the cops that she had heard suspicious noises.

Just like with the San Francisco Bay Area Rapid Transit refusing to release tapes of teen gang assaults on train-riders because it would confirm deplorable stereotypes, mentioning the name of the Minneapolis shooter cop — Mohamed Noor — might lead to suspicions that Minnesota police departments have affirmative action programs that lead to incompetent nonwhites like Noor and Jeronimo Yanez, who shot Philando Castile a year ago, getting hired.

That's a gigantic lie, and reporters who don't "lie by omission" about black or immigrant crime are accused of racism.