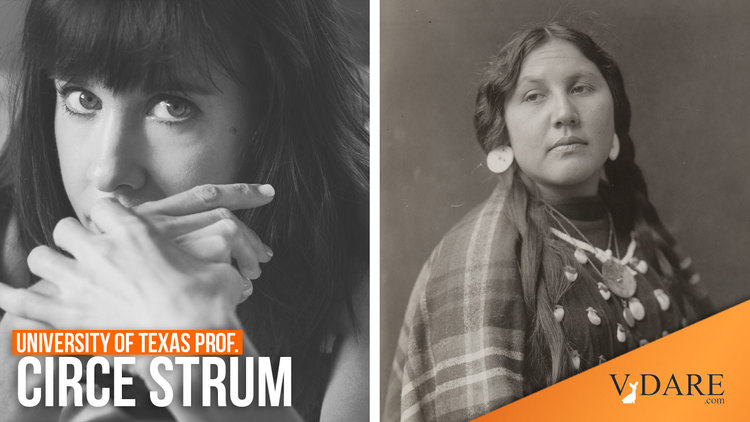 From Yahoo News and The Conversation:

[By Circe Sturm, Professor of Anthropology, University of Texas at Austin College of Liberal Arts]

Professor Sturm-und-Drang looks like a 1970s pop singer, which is okay by me. On the other hand, the name “Circe Sturm” sounds like a Warning Label.

The Native American population in the U.S. grew by a staggering 86.5% between 2010 and 2020, according to the latest U.S. Census – a rate demographers say is impossible to achieve without immigration.

Birth rates among Native Americans don’t explain the massive rise in numbers. And there certainly is no evidence of an influx of Native American expatriates returning to the U.S.

Instead, individuals who previously identified as white are now claiming to be Native American.

Another way to describe this recent adoption of Native American identity is what I call “racial shifting.”

These people are fleeing not from political and social persecution, but from whiteness.

I spent 14 years researching the topic and interviewing dozens of race-shifters for my book “Becoming Indian.” I learned that while some of these people have strong evidence of Native American ancestry, others do not. …

Yet as historian Philip Deloria argued in his 1998 book, “Playing Indian,” something happened in American society in the 1950s and 1960s that allowed white Americans greater freedom to appropriate nonwhite identities. White Americans, often with the encouragement of the counterculture and later New Age movements, began to seek new meanings in Indigenous cultures.

What distinguishes contemporary racial shifting from these earlier forms of appropriation is that most race shifters see themselves not as white people who “play Indian,” but as long-unrecognized American Indians who have been forced by historical circumstances to “play white.”

… As one woman from Missouri put it: “They forced us to be white, act white, live white, and that is a very, very degrading feeling.”

The genealogical and historical details might not always be verifiable, but the emotions are real enough. It makes perfect sense that once race shifters link their melancholy to assimilation, they try to ease their sadness by rejecting whiteness and reclaiming an Indigenous status. …

In the wake of 1960s civil rights activism and debates about multiculturalism, whiteness has taken on increasingly negative connotations.

In my interviews with race shifters, for example, they frequently associated their former whiteness with racial and cultural emptiness.

As one woman put it: “We had an emptiness inside of us, that we did not know who we were or what we were.” They also associated whiteness with social isolation, unearned privilege and guilt over colonialism and slavery. …

This shift from white to Indigenous self-identification is, I believe, fundamentally about a desire to leave behind the negative connotations of whiteness and move toward the material and symbolic values that now attach to Native American identity.