Five Illegal Aliens to Attend SOTU in Capitol; Lack of ID No Problema 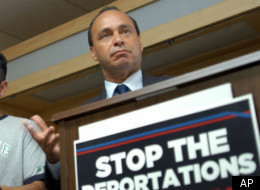 One strict legal system for the little citizens; another, more permissive standard for the foreign lawbreakers who infest the country — that’s America today.

Today’s example is the invitation of five Democrats to illegal aliens to attend the State of the Union speech held in the nation’s capitol. Everyone else has to show proper American identification to get in the door, but not the invasive foreigners.

Naturally one of the inviters was amnesty pest Rep Luis Gutierrez (shown). His date for the evening is Gabino Sanchez, a Mexican unlawfully residing in North Carolina.

Why isn’t some pro-sovereignty Republican bringing an American who has can’t find employment because of illegal immigration? Why not invite a citizen who has suffered job discrimination because of not speaking Spanish?

WASHINGTON — At least five Democrats say they are bringing illegal immigrants to the U.S. Capitol for the State of the Union? address on Tuesday evening, despite a rule requiring guests to provide their Social Security numbers.

The government doesn’t seem to mind.

A document obtained by The Daily Caller indicates that all guests attending the president’s annual address to the country undergo a government background check, which is required by the House Sergeant at Arms.

That includes providing a Social Security number, which could pose problems for those in the country illegally and set off alarms for government employees performing the background checks.

“For guests who do not posses a valid Congressional ID, please provide their full name, Social Security number, and date and place of birth,” the Sergeant at Arms office wrote in a memo to congressional offices.

The Daily Caller obtained a copy of the memo, titled “How to Submit Guest Information for the ?State of the Union Address,” which instructs congressional offices how to submit the information online.

The memo states: “All information is collected in a secure manner solely for the purpose of performing a background security check.”

On Tuesday a spokeswoman with the U.S. Immigration and Customs Enforcement agency was mum about the presence of the illegal immigrant? attendees.

“I don’t have any comment for you on this,” ICE’s Gillian Christensen said, when TheDC inquired whether the agency was aware of this.

Most of those guests are young. Alan Aleman, the 20-year-old guest of Michelle Obama, is a benefit of President Obama’s deferred deportation program for illegal immigrants? who were brought into the country when they were under 16 years old. He has since been given a Social Security number.

But Gutierrez is bringing 27-year-old Gabino Sanchez, an illegal immigrant who lives in South Carolina and is fighting deportation, as his guest.