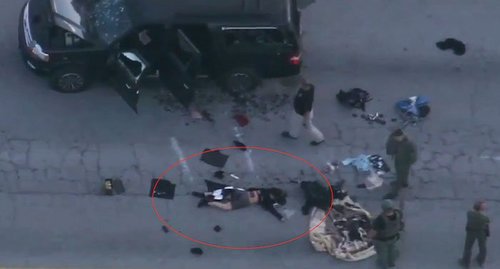 News reports now say that the jihad wife imported from dar al-Islam was the first to fire on unarmed innocents at a Christmas party in San Bernardino.

I read a couple of articles about the fiancée visa since that was the immigration route taken by Malik to reach the jackpot of infidel targets — America. But none of the MSM news reports were as informative as the discussion with former INS Retired senior special agent Mike Cutler.

Apparently arranged marriages, where the couple has never met, are totally acceptable to the US government and don’t suggest fraud or slavery, which are frequent motivations for the practice. What could possibly go wrong with so little screening? It invites abuse and worse, as we have recently seen.

Islam has been at war with everyone else for 1400 years, and this country should wake up and smell the gunpowder. Admitting historic enemies inside the gates is insanely dangerous. America didn’t have Nazi visas during WWII.

TUCKER CARLSON: Details are emerging this morning about the female shooter the San Bernardino massacre that killed 14 people. Tashfeen Malik had been living in Pakistan and visiting family in Saudi Arabia where she grew up, but she passed several background checks and entered the United States on July of 2014 on a K-1 visa, a so-called fiancee visa, that visa allowed her to travel here and get married within 90 days of arriving. So how could she have made it into the country with hardly any vetting? Here to weigh in is retired senior specialist from INS Michael Cutler. Thanks for joining us.

MICHAEL CUTLER: Thank you so much for having me.

CARLSON: It turns out we knew very little about this woman before letting her in. Did we try to learn more?

CUTLER: Well, we try but you know we keep hearing about the vetting process for refugees. In most cases, many of our visa programs have no vetting process. If you look at the K-1 program it has the highest approval rate or one of the highest approval rates because how do you screen this? This isn’t like marriage fraud. I did marriage fraud investigations and we’ve seen what terrorists have used marriage fraud and visa fraud — the 9/11 Commission talked about that by the way. But here you are talking about somebody going to immigration saying, I’m about to marry this person, I’ve never met them. Now they’re supposed to have met them within two years but if going to their countries so far away would impose a hardship or if their religious beliefs don’t require a face-to-face meeting you could bring someone in literally sight unseen. How do you make certain that this is legitimate?

CARLSON: Here’s my concern. A visa holder from Saudi Arabia or Pakistan is qualitatively different from one from say New Zealand or South Korea. There’s just a lot of crazy people in Pakistan and Saudi Arabia. Do we give special attention to those?

CUTLER: My understanding is that we do not. Think about something else — if you are here illegally from one of those countries that sponsor terror, why are we not looking to arrest those folks to shrink that haystack that the deadly needles are hiding in? And the vetting process falls flat on its face across the board. If you look at the Tsarnaev brothers, they got political asylum and they immediately went home. If you’re claiming I can’t go home and then you go home, maybe you lied.

CARLSON: And by the way they were coming from a place — they were Chechens — where there’s a lot of Islamic extremists

CUTLER: And if you want to talk about vetting, the law requires that if you become a citizen, they are supposed to conduct a good moral character investigation. How is it one of the Tsarnaev brothers became a citizen just before he carried out the attack? Faisal Shahzad, the Times Square bomber, was naturalized months before he set off the car bomb in Times Square. At sentencing the judge said you took an oath is an American. He said I lied, I hate America. I don’t need your freedom. I have sharia. Sharia gives me freedom.

CARLSON: Why don’t we make distinctions between countries the pose a threat to us potentially and those that don’t?

CUTLER: We should, but unfortunately when you see what’s happening now in England and France and we still have a visa waiver program? They talk about fixing the visa waiver program. They can’t fix it; it needs to be discarded. This is about the US Chamber of Commerce. They’re saying, if these folks have been to Syria or Iraq — do you think they’re getting stamps on their passport? And if they are a dual national, they can cover their trails by alternating which passport they present when they travel. So we are making it so easy and by the way, do you know that when an alien naturalizes, they get a passport with only their new name, so they’re putting themselves in their own witness protection program? I raise this at hearings and I still have yet to get a solid answer.

CARLSON: So irresponsible. Michael Cutler, thank you for that.