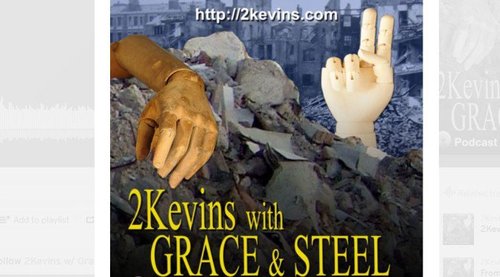 2Kevins With Grace & Steel: Xmas Doom and Gloom, My Illegal Co-Host and the Fabulous Rachel Marsden

Episode 14 of my podcast with Kevin Steel is now posted here. In Part 1, “It’s Beginning to Look a Lot Like Crashmas,” we examine the possibility of a recession (or worse) in early 2016. That the entire world waits with baited breath for Empress Janet Yellen to decide whether to raise the Fed rate by one-quarter of one percent demonstrates (at least to us) that the global economy has become a vast Potemkin village. Not for the first time, I invoke the dilemma posed by Danny the drug dealer in Withnail & I, “If you're hanging on to a rising balloon, you're presented with a difficult decision: let go before it's too late, or hang on and keep getting higher—posting the question, how long can you keep a grip on the rope?”

In Part 2, my co-host Kevin Steel recounts how he came to be an illegal immigrant working on a construction site in Alaska and how that led to his dependence on the tender mercy of his boss, Brian Hyland, former teen idol and singer of the immortal "Itsy Bitsy Teenie Weenie Yellow Polkadot Bikini."

We conclude the program with a consideration of two women who’ve had more lives than a cat. The first, Hillary Clinton, needs no introduction here. The second, Rachel Marsden, who now dispenses advice on geopolitical security via the Chicago Tribune, is the same Vancouver crybully who precipitated the most spectacular immolation in Canadian academic history before becoming a born-again right-winger, serial sexual stalker, a Parliamentary aide, a Julia Roberts impersonator and a Fox News personality.