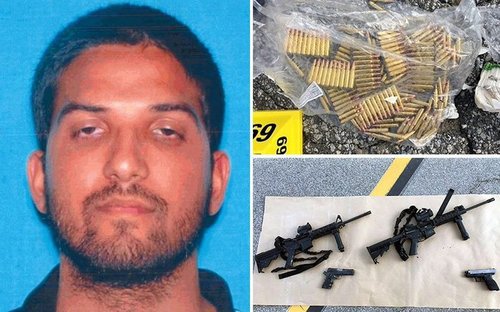 San Bernardino: The Beard Defense And Trump's Response To The Reporter Who Said The Killers Were "Regular People"

The late Lawrence Auster was working on a list of Non-Islam Theories of Islamic Extremism, that is, explanations of Islamic terrorism that don't blame Islam.  I've now encountered  a few new ones to add to the list:  1) Being teased about a beard, and 2)Not having friends.

Of course, both these explanations were cooked up by a lawyer.

The gunman who helped turn a San Bernardino holiday bash into a slaughterhouse had been made fun of by his co-workers for his beard, his family's lawyers claimed Friday. Syed Rizwan Farook was a devout Muslim who wore a beard for religious reasons and "usually shrugged off any jokes that were made about this facial hair," attorney David Chesley said. San Bernardino shooter was teased about beard, family lawyers say  Chris Francescani and Corky Siemaszko, AOL, Dec. 5, 2015

I've had a beard before, but I was never under the impression that killing 14 people was a legitimate response to being teased about it.

"He was a very isolated, introverted individual, with really no friends that we could identify" in the San Bernardino County Health Department, where he had worked for five years, the lawyers said.

The "no friends" defense.   Lawyers are creative.

Chesley and attorney Mohammad Aubershaid made the comments during a news conference aimed at slowing what they argued was a rush to judgment by the FBI and media to declare Farook and wife Tashfeen Malik terrorists.  The lawyers, who represent Farook's mother, two sisters, and brother, spoke shortly after the FBI announced  that the agency was investigating the mass shooting as an act of terrorism.

Chesley said the family was "totally shocked" after learning that Farook and Malik had gunned-down 14 people and wounded 21 more Wednesday at the city's Inland Regional Center.    The couple was later killed in a shootout with cops.

Pakistani-born Malik pledged allegiance to the leader of ISIS  on Facebook just before she and her husband carried out the massacre, law enforcement sources told NBC News.

The Farook family lawyers insisted, however, that they haven't seen any evidence to warrant a terrorism investigation and said the couples' kin had no idea they had supposedly become "radicalized."

In a contrast to such absurdities, check out the video of Donald Trump's response to a reporter who said the shooters were "regular people".   It's worth watching, here's part of the text:

TRUMP:   When you have pipe bombs lying all over the floor, I don't think they're regular people.... REPORTER: They slipped under the cracks, though. What do you think should be done differently? TRUMP: Well, again, there were people who knew bad things were going on. People knew that bad things were going on, and they didn't report it because of [fear of] racial profiling. But I don't think they were regular people. To me, they're not regular people. To me, they were criminals, and it's too bad somebody didn't find out about it sooner.  What happened when a reporter told Donald Trump the San Bernadino killers were just 'regular people'  by Byron York,  Washington Examiner,  December 5, 2015

Watch Trump on video below: