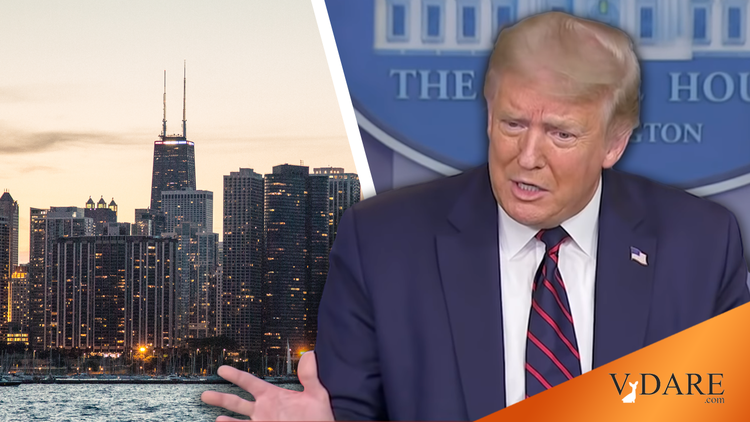 Feds To Chicago To Fight Crime...But Not To Bust Illegal Aliens?

President Trump has announced a Federal crackdown in Chicago. This is different from the Federal crackdown in Portland. Besides the racial difference, whites in Portland are rioting and committing acts of terrorism to remove what they consider to be a White Nationalist President, while blacks in Chicago are just doing what blacks do when not closely supervised by whites; shooting each other over mostly perceived slights and the cycle of retaliation that engenders.

Most of the shootings in Chiraq are not because of drug dealing or other crimes, but are generally blacks being blacks. While the Christopher Columbus statute was attacked in Chicago, that was mostly, though not exclusively blacks.

However, the Federal Bureau of Investigation (FBI)-led task force will not be protecting monuments in Chitown, as those are not Federally owned. But the task force, code named Operation Legend, which is operating in other cities as well, will be targeting the blacks who do the shootings with enforcement of various Federal laws concerning drug dealing, illegal guns, and drug trafficking.

Consequently the Bureau of Alcohol, Tobacco, Firearms, Explosives and Really Big Fires (ATFE), the Drug Enforcement Administration (DEA), and U.S. Marshals Service (USMS) will be the bulk of the agents assigned. They will be augmented by U.S. Immigration and Customs Enforcement Special Victims Unit (ICE SVU) as well.

The strategy will be something familiar, black murderers and violent thugs will not be targeted for large scale shootings in the streets, but with related Federal crimes, similar to how the T-men, Treasury Agents, got Al Capone, not for violating prohibition, but for tax evasion.

Black street thugs will be put in Federal prison, not for shooting children, but for unrelated Federal crimes.

President Trump said Wednesday his administration is sending federal law enforcement officers into Chicago and Albuquerque, expanding his controversial crackdown on what he claims is an unchecked surge of violence in Democratic-run cities.

“Today I am announcing a surge of federal law enforcement into American communities plagued by violent crime,” Trump said in remarks from the East Room of the White House.

He added he had “no choice but to get involved.”

The twist for immigration patriots is that the old familiar ICE SVU will be on the case, doing what ICE SVU does, ignoring immigration law and trying to recreate their glory days as U.S. Customs Service (USCS) T-men. And they are quite explicit about it.

All illegal aliens in Chicago have been advised they have nothing to fear, despite the fact that all the drugs in Chiraq come through Mexico and are smuggled and wholesaled to local black gangs are Mexican illegal aliens.

The Department of Homeland Security (DHS) is planning to send 150 federal agents to Chicago this week, The Chicago Tribune reported Monday.

A specific plan on what the agents will be doing has not been made public, according to the Tribune. One city official told the newspaper that the city was aware of the plan but not any specifics…

One Immigration and Customs Enforcement (ICE) official in Chicago confirmed the deployment to the Tribune. The official said the HSI agents, who are part of ICE, would not be involved in immigration or deportation matters.

While it is apparent that most of this deployment of Federal law enforcement to various cities is politically motivated, arresting blacks in Chitown and giving Antifa terrorists a beating in Portland can only help President Trump in the upcoming election, who is advising Chad Wolf, DHS Secretary, to have a hands-up, don’t shoot policy on arresting illegal aliens?

That would be just as popular as thumping Yippies and arresting black criminals. Clearly Wolf does not have President Trump’s best interest at heart, but why is Ken The Knife Cuccinelli not on the ball? He has good political instincts and President Trump needs all the good publicity he can get.

Always the story for Donald J. Trump: His own appointees don’t have his back. If Donald J. Trump does not want to lose the election and then be prosecuted by Joe Biden, he needs to want to win. Arresting rioting blacks and thumping hippies is a good way to generate interest and voting by the historic American nation. The Left is frightened that they are losing the narrative with the riots in Portland and the attacks on statues, as well as black crime. I think it is good politics to provoke the Left in Portland, nothing says electing a Republican better than riots in the streets—just see what the Berkeley riots did for Ronald Reagan, and the Chicago Democratic Convention riots did for Nixon in '68.

And it is so easy to manipulate Antifa into violence, as they think they have permission. They have had it for quite a while, Jeff Sessions did nothing against them. But President Trump can ride Antifa riots to re-election. He just has to send more agents to Portland and take back the streets using tear gas, pepper spray, flash bangs, and batons. No more pussyfooting around, make Portland squeal.

And make illegal aliens squeal as well. Make ICE SVU do their job.