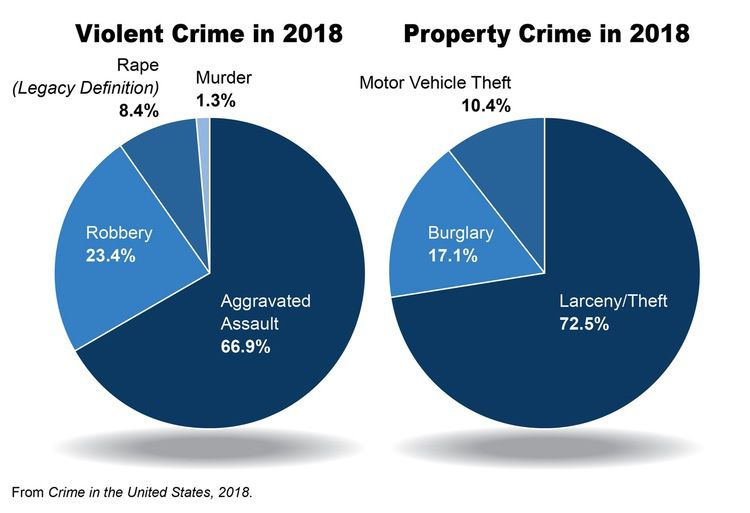 The big rise in murders after The Establishment went nuts over Ferguson and Black Lives Matter in 2014 contributed to Donald Trump becoming President.

So far, crime is down a little under Trump’s first two years versus the sharp rise in Obama’s last two years. The FBI announced its official 2018 crime stats this week. From the FBI:

September 30, 2019
FBI Releases 2018 Crime Statistics
For the second consecutive year, the estimated number of violent crimes in the nation decreased when compared with the previous year’s statistics, according to FBI figures released today. In 2018, violent crime was down 3.3 percent from the 2017 number. Property crimes also dropped 6.3 percent, marking the 16th consecutive year the collective estimates for these offenses declined.

So, to put this in crime scene terms, the new EMTs in the White House have stopped the bleeding, but the body politic isn’t close to being as healthy as he was before The Establishment’s giant own goal over Ferguson.

However, keep in mind that the number of homicides attributed to a year seems to go up over time as missing persons are found in shallow graves, as people in comas die, or as events get reclassified. (E.g., the doctor who injected Michael Jackson with a powerful sleep drug was at times charged with a type of negligent homicide and at other times MJ’s death was considered not a homicide. I don’t recall the final outcome.)

Nationwide, there were an estimated 7,196,045 property crimes. The estimated numbers for all three property crimes showed declines when compared with the previous year’s estimates. Burglaries dropped 11.9 percent, larceny-thefts decreased 5.4 percent, and motor vehicle thefts were down 3.1 percent.

Property crimes are way down from the bad old days. In 1988 I bought a new Honda Accord in the base model (no AC, no power windows or locks, no automatic transmission) mostly to avoid getting a radio, because having a radio in your car in Chicago in 1988 meant you’d spend a lot of money over the years getting your smashed windows replaced. Once my wife broke down and bought a $10 transistor radio so she could listen to music when driving. Within days a car window was smashed and the $10 radio was gone.

Here are the FBI’s 2018 Murder Offender numbers. They have the usual problems with crime statistics with not doing a good job disentangling non-Hispanic whites from Hispanics. Most other government statistics work hard to distinguish between the two, but crime statistics remain murky. (“Other” in the race column includes American Indians, Asians, and Pacific Islanders.)

Here are the FBI’s stats on single offender / single victim murders (I think these are cases where the mystery of who-dunnit has been resolved); Blacks accounted for 15.8% of the offenders in murders of whites, just under twice the white contribution to the murders of blacks. So, the two races in 2018 generally do a pretty good job of keeping most of their homicidal urges within their own races.