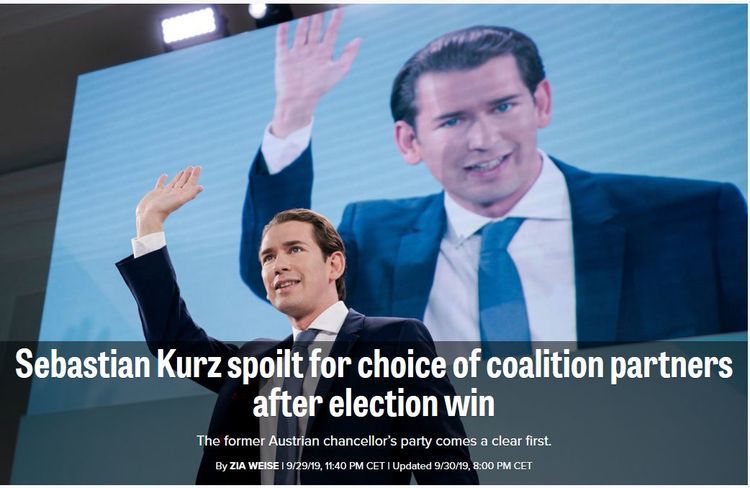 The results of the national elections in Austria surprised almost all observers. The gains and losses of all parties were far clearer than expected. Sebastian Kurz, the former prime minister, achieved with his center-right ÖVP 38.35 percent (+6.88) of the voters, the socialist SPÖ registered with 21.54 percent (-5,329 its worst result in the history of the party).

The gains of the ÖVP came almost entirely from former voters of the FPÖ. First there was the scandal around the illegally taped Ibiza video, which showed the drugged and drunken party leader H.C. Strache promising a (faked) Russian billionaire public contracts in exchange for financial aid to his party. Then, a few days before the elections, a former bodyguard of Strache accused him of misusing party funds for his extravagant private lifestyle and accepting money from unidentified Eastern European sources. There is no proof of those allegations so far but they probably induced former right-wing voters to pass over to Kurz.

The second reason for the poor performance of the party was the incessant campaign against its supposedly "right-extremist“ character which was widely supported by the mainstream media, most of all by the public radio and TV.

Kurz accused the FPÖ of not distancing itself clear enough from the patriotic movement of the identitarians led by Martin Sellner. Instead of recognizing that the aims of the identitarians to block immigration and Islamization are almost identical with his own positions, Kurz defamed them of being part of a worldwide right extremist and terrorist network and threatened to ban the identitarian movement. As most Austrians are very conservative and dislike any kind of radicalism.

On the left side, former voters of the SPÖ moved to the Greens, mostly because of the equally incessant climate hysteria in the Main Stream Media. Instead of understanding that the Greens were much more dangerous for them than the parties on the right party leader Pamela Rendi-Wagner tried to present the SPÖ as greener than the greens.

Kurz will now try to form a new government. Arithmetically he has three options for a coalition (SPÖ, Greens, FPÖ) but none of them will be easy to accomplish. See Sebastian Kurz spoilt for choice of coalition partners after election win | The former Austrian chancellor’s party comes a clear first, by Zia Weise, Politico.com, September 29, 2019.