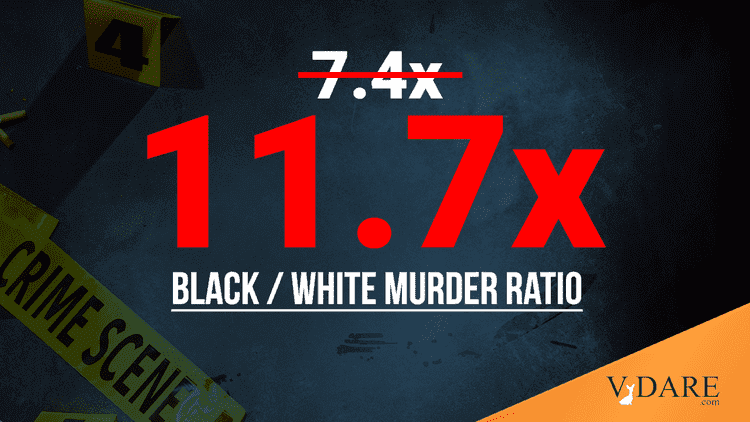 Earlier, by Steve Sailer: How Much More Homicidal Are Blacks Than Whites? 7.4x More Like the Obama Administration Said, or 11.7x More?

What with race and law enforcement being much in the news this month, you might think we’d see more reference to the most authoritative official statistics on the subject. Here are the latest FBI statistics on murder offenders by race: At this point, 29.5% of 2018 murderers are of unknown race, whether because the case hasn’t been cleared yet or because the local agency didn’t get around to reporting the race to the federal government.

Blacks make up 13.4% of the population at present.

So, blacks in 2018 were 7.9 times more likely per capita to be murder offenders than the rest of the population.

Here’s how to do the arithmetic:

In recent generations, this black-to-all-else homicide offender ratio goes up and down somewhat, depending upon what drugs are hot, the political climate, and so forth, but usually winds up a little under 8X. For example, in 2011 the Obama Administration’s Bureau of Justice Statistics reported that blacks made up 52.5% of homicide offenders over the 29 years from 1980 to 2008: These stats would seem rather relevant to current discussions, but for some reason, they just never see to come up…