Ann Althouse points to this photo of striking teachers in Chicago, via Drudge. 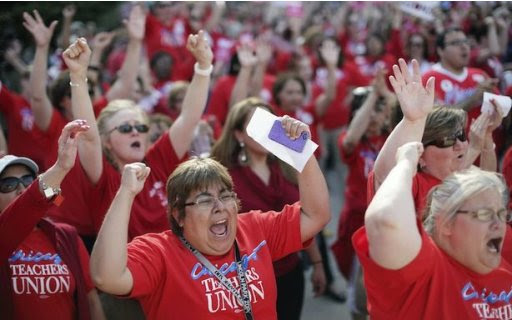 She asks if it's "too manipulative?" (It's a Reuters photograph)

What it made me think of was Peter Brimelow's notorious beginning to his book about the teachers unions:"They're extraordinarily fat, for a start."

"That's how Peter Brimelow, long-time journalistic critic of the National Education Association (NEA), begins The Worm in the Apple.

His fitness assessment is based upon observing the masses attending an annual convention of the NEA, where an alarming proportion of the 9,000 teacher-union-reps from public-school districts all over the USA "wobble and waddle … with thighs like tree trunks, bellies billowing, jowls jiggling."

A couple of Althouse commenters notice the same thing:

Here I hasten to point out that Brimelow's remark was not aimed specifically at the women of the NEA; there are are a lot of pudgy male teachers out there. Another commenter notices something else about these teachers:

That's a lot of white people. Are the public schools majority white?

Well, no, they're not. According to Chicago Public Schools : Stats and facts, less than 9 percent of the school children in the Chicago area are non-Hispanic white:

What about the teachers' racial breakdown?

There is a suspiciously high number of black principals—either the Chicago School District has solved the test score gap internally, or they're promoting people on some other basis than Civil Service exams.

However, the unusual whiteness of the photographed picketers is probably due to the fact that who shows up on picket lines is the kind of people who volunteer for committees. That's the kind of person who becomes a union activist. That demographic includes a lot of white ladies.

The head of the teachers union in Chicago is Karen Lewis. A first look at a profile of her suggested she was a white woman, weighing about 260.

That would  go with my thesis of "nice white lady" volunteers, but then I asked myself "How could a white lady get elected head of the Chicago Teachers Union?" Ah!

So searched out a profile of Karen Lewis, pictured below, and I discovered that according to her biography

"Lewis, the child of Chicago public school teachers and a South Side product of Chicago's public school system, grew up in Hyde Park. Street-smart and witty, Lewis attended Dartmouth College in the Ivy League, where she has said she was the only African-American female in her 1974 graduating class." ['She will not cower' | Union President Karen Lewis forged her confrontational style in the classroom, By Cynthia Dizikes and John Byrne, Chicago Tribune, September 11, 2012]

Based on this photograph, her classmates might not have known that.