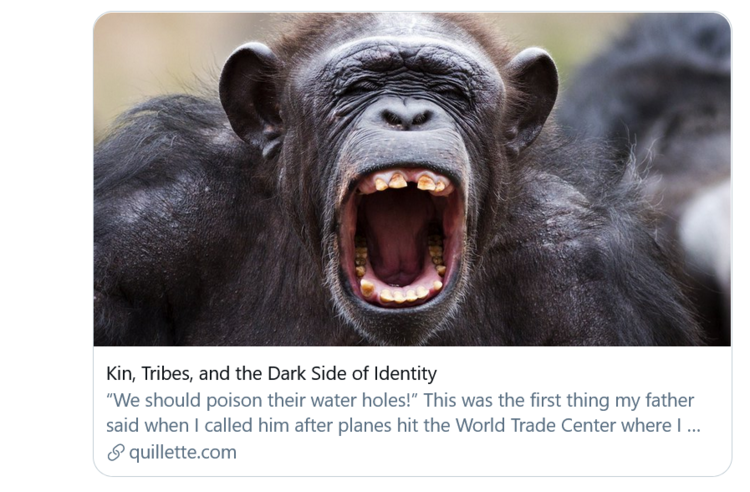 Evolutionary Anthropologist Recommends We Knock Off This 'Race' Stuff

Earlier: Fads and Fallacies In The Name Of "Race Does Not Exist"

Over at Quillette, in Kin, Tribes, and the Dark Side of Identity, [November 22, 2020] evolutionary anthropologist Robert Lynch makes the case that we'll never get rid of "us versus them" mentalities because they're burned into our DNA.

"The benefits that come from forming groups are hard to overestimate. It is not an exaggeration to say that this capacity, which allows us to build communities and cooperate, under-girds our entire civilization. But there is a dark side, too. Hostility towards out-groups is intimately tied to our ability to cooperate and make sacrifices for one another and these traits are likely to have evolved together. In other words, what has allowed human beings to flourish is also integral to some of our most morally repugnant behaviors, including slavery and genocide. The pressing issue for contemporary liberal democracies, therefore, is finding ways to curb the dark side of our parochial nature while still reaping the benefits of large-scale cooperation."

Nicely put, though it's curious to hear an evolutionary anthropologist use terms like "dark side" and "evil".  Does nature know "evil"?

He also makes the weird suggestion that "tribal" Trump supporters have violence in mind when they protest what they see as massive fraud and a stolen election.  If only.  White conservatives remain pretty securely locked down these days -- and I mean, literally locked down.

Lynch winds up by discouraging us from emphasizing our racial identities as if we somehow have control over that.

"A politics based on membership in a particular religious, racial, or social group rather than broader groupings of people with the same political views was a dubious luxury that our species can simply no longer afford."