Don’t be surprised if you are welcomed to an Orchard Supply Hardware Store by a robot ready to direct your shopping to the right aisle. Just show the replacement part needed to the machine’s screen and the OSHbot will escort you to the correct spot.

An addition, the robot celebrates diversity by speaking Spanish, so immigrants will find another disincentive to assimilate linguistically (which Americans expect of newbies). 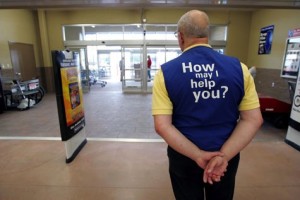 Of course, robot greeters mean fewer jobs for humans. Store welcomer is a position sometimes taken by older workers, who are often seen as useless in today’s whippersnapper employment culture. Many Americans need to work well into their post-retirement years.

Finally, robot greeters are another example of how automation and smart machines are rapidly replacing human workers throughout the economy. The idea that America needs millions of immigrant workers to replace retiring boomers is entirely wrong-headed given the advances in technology.

Oxford University forecast last year that 45 percent of US jobs were vulnerable to robots or computerization in the next two decades. Another estimate is that one in three jobs will be done by smart machines by 2025 — that’s only 11 years off.

So Zero is now the correct number of immigrants for the roboticized future economy to keep producing goods and services. But Washington doesn’t seem to notice.

If you happen to find yourself in a Orchard Supply Warehouse in Northern California this November, don’t be alarmed if you are approached by a large LCD screen on wheels, especially when it talks to you. Lowe’s will introduce new robot shopping assistants at a trial location later next month and claims this is the first robot to inhabit such a role in a retail environment. Lowe’s, which acquired Orchard Supply Hardware last year, has dubbed the new assistants the ‘OHSbot,’ as they will be making their debut in an OSH location.

If all goes according to plan, the OSHbots will welcome customers as they enter stores and ask if they can help them find anything in particular. The robots will be able to provide details on items in the store and will also walk–er, wheel customers to the exact location of the item(s) they’re looking for.

The OSHbots stand five feet tall and are made of white plastic. They feature two screens, one on the front and back of the robot, and can even allow customers to video conference with store associates. OSHbots will also be able to scan an item a customer has in their hands utilizing a 3-D scanner built-in to the robots’ bodies. Oh yeah, and they can also speak Spanish. Pretty neat.

The OSHbots were created through a partnership between Lowe’s and a startup company called Fellow Robots. Accordin to Kyle Nel, head of Lowe’s Innovation Labs, the robots will make shopping more convenient for customers and also combine aspects of e-commerce with traditional shopping.

OSHbots will also display ads on their back screen as you follow them to your specified item(s), and those ads will be relevant to the section of the store you are in. So for instance, if you’re passing the lighting section, the OSHbot might display and add for light bulbs or a lamp and then switch to a gardening product as you pass that department, etc.

The OSHbots use lasers in order to accurately and safely navigate through aisles, and it’s the same light detection and ranging system employed by the self-driving cars made by Google.

The reason we haven’t seen robots in retail stores sooner is because of cost. the Lidar laser system the robots use to navigate can cost nearly $50,000, however, more cheaper options are now becoming available, and should the OSHbots prove a success this November, we might be seeing a lot more robots everywhere else.