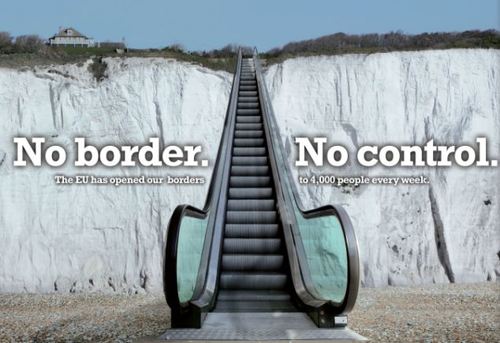 Just when you think crazy utopian liberalism has gone about as far as it can go, you see the outer limits declared on the front page of the New York Times, as happened on Tuesday’s paper that headlined “Crisis Tests European Core Value: Open Borders.” 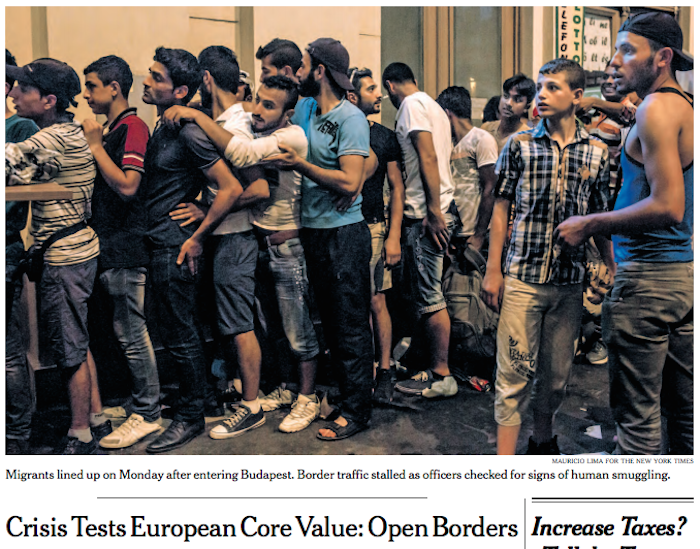 Silly me, I thought the Schengen Agreement creating a borderless area was designed to increase trade and make trans-Europe travel easier for citizens and tourists. The idea that it is now being used to facilitate illegal immigration for thousands of economic grifters is very odd, to say the least. 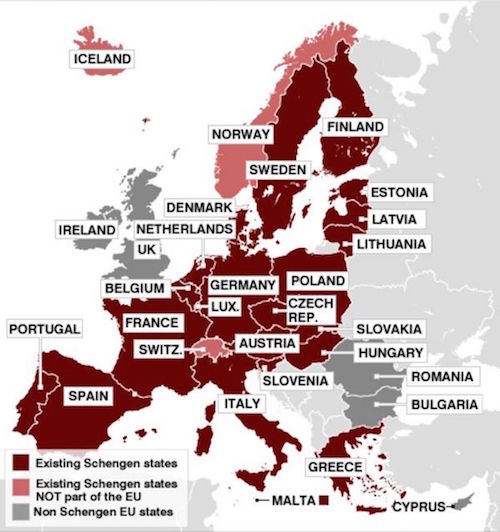 Nevertheless, Germany’s Chancellor Angela Merkel has been willing to defend the system, despite having to absorb at least 800,000 refugees and economic opportunists as part of the open borders ideal.

People talk as if Germany is required by history to accept hundreds of thousands of historic enemies of the west because of Hitler. The Brussels bureau chief of the Financial Times said exactly that Tuesday on NPR (What Is The Realistic Way To Deal With Migration In Europe?):

PETER SPIEGEL: Well, Germany is, and this is, I think, probably unique because of Germany’s history. You know, obviously they have sort of a still, you know, historical duty, I think, they feel – and Merkel has said this – to welcome refugees because of the Nazi atrocities of World War II.

Really? Wouldn’t it be better to avoid a sharia future for Europe rather than wallow in useless penitence for last century’s crimes?

Merkel has admitted that multiculturalism has “utterly failed” in Germany, but now she is pouring fuel on the fire. A dangerous demographic revolution fueled by illegal immigration of the worst kind is happening now that will change the nation forever. And Merkel is telling critics of her suicidal policy to shut up.

Somebody should tell Merkel that borders exist to keep enemies out. A January poll showed 57 percent of Germans believe Islam is a threat, but she isn’t listening to them. Perhaps the ghost of Charles Martel — who defeated the Muslims invading France in the Battle of Tours — can whisper the simple wisdom of borders in her ear.

VIENNA — The desperate migrants and asylum seekers now flooding into Europe by the tens of thousands, and the inability so far to accommodate them in an organized way, may be starting to fray Europe’s commitment to erase old borders.

The evidence was on stark display Monday, as the Austrian authorities disrupted traffic from Hungary, causing backups of at least 12 miles, while inspecting vehicles for smuggled migrants. The crackdown could last indefinitely.

The official explanation was to avert another mass death of migrants like those found in an unventilated truck near Vienna last week, believed to be victims of a smuggling ring. But the practical consequences of the crackdown mean that routine passport-free travel between Hungary and Austria is no longer routine.

In another disruption, trains from Hungary packed with migrants, many apparently seeking refuge in Germany, were stalled at the Hungary-Austria frontier for hours. By evening all were allowed to proceed amid some confusion about how far west the trains would go and whether all their passengers would be permitted to continue traveling.

German and Austrian officials also increased controls in their border region, with the official explanation that they were seeking to stop human traffickers.

And Chancellor Angela Merkel of Germany, in some of her strongest language yet on the subject, warned that freedom of travel among the 28 member states of the European Union could be imperiled if they did not agree on a shared response.

“If Europe fails on the question of refugees, if this close link with universal civil rights is broken, then it won’t be the Europe we wished for,” Ms. Merkel told reporters in Berlin.

Unfettered movements of people and goods in the European Union, the world’s largest economic bloc, is a precept of its cohesion, like the free flow within the United States.

In a continent already struggling with a unified response to the Greek debt crisis and the movements of militant jihadists, the influx of migrants — many of them from war-ravaged areas of the Middle East and Africa — appears to have only further deepened frictions.

Long-term questions over who takes care of them, how to screen them and who pays the expenses have all been left unresolved.

These questions go to the heart of the viability of the European Union’s borderless interior, which member countries on the edges of Europe are required to police and protect. Some of those countries — notably Greece, Italy and Hungary — say they are so economically stressed that they are admitting migrants with little or no processing. Many are heading for the wealthier countries like Germany, which now expects 800,000 arrivals this year.

Ms. Merkel, Europe’s most powerful leader, has said she wants fellow European countries to take more of the migrants.

She faced an immediate challenge on Monday from the leaders of Slovakia and the Czech Republic, who said that they would seek to form an alliance with Hungary to resist any quota-based redistribution of migrants.

The question is now likely to preoccupy European Union interior ministers who will meet in an emergency session on Sept. 14 to devise an answer to the refugee onslaught, the biggest to confront Europe since World War II.

The Austrian police, who on Sunday night began checking vehicles crossing from Hungary, reported finding 200 migrants and arresting at least five people suspected of being smugglers.

The Austrian authorities argued that they had no choice after the deaths of 71 migrants, whose decomposing bodies were found Thursday in the truck, which had come from Hungary.

The Hungary-Austria border is the latest in a series of pressure points on migrant movement that have appeared all over Europe.

Clashes erupted less than two weeks ago between migrants and Macedonian officials who had sought to close their border with Greece. British and French officials strengthened security around the 31-mile Channel Tunnel because of migrants’ attempts to smuggle themselves through it into Britain.

While thousands have drowned at sea trying to cross the Mediterranean and enter Europe, the mass deaths on the road in Austria last week showed that migrants faced lethal dangers once inside Europe as well.

“We want to save lives and fight the criminal smugglers,” said Johanna Mikl-Leitner, Austria’s interior minister. The controls would remain in force, she said, for an “unlimited” time.

Most new migrant are crossing from Turkey to Greece, Macedonia and Serbia before entering Hungary and then heading to wealthier northern countries.

The crisis has now become a priority for Ms. Merkel, who told reporters that the principle of unfettered movement among European Union member states, a freedom enshrined in what is known as the Schengen Agreement, is at risk.

“If we don’t succeed in fairly distributing refugees, then, of course, the Schengen question will be on the agenda for many,” Ms. Merkel said.

Hungary, however, accused Germany of creating new complications in the migrant crisis — and encouraging the influx — with what the Hungarians described as a relaxation of restrictions on Germany-bound refugees from Syria.

“The resulting confusion has often created unclear circumstances and situations which are difficult to manage,” said Zoltan Kovacs, a Hungarian government spokesman, arguing that Hungary was doing its part to uphold the integrity of Europe’s external borders.

“The Hungarian government requests that Germany clarifies the legal situation in order to eliminate this ambiguity and controversy,” he said.

Last Tuesday, Germany’s office for migration and refugees issued new guidelines for handling asylum applications from Syrians, stating that officials would “effectively no longer enforce” the Dublin Regulation, which establishes the criteria for such cases. Consequently, those fleeing Syria now have a strong chance of remaining in Germany, regardless of how they reached the country. The change comes as German officials scramble to expand the infrastructure to speed up the handling of asylum applications, and amid criticism that they had ignored warnings and failed to prepare.

The “truck of shame,” as the vehicle abandoned in Austria was labeled in a headline in the French daily Libération, was first spotted on the Hungarian side of the border around 9 a.m. on Wednesday, Austrian officials said at a news conference on Monday, when they released new details about the case.

A Hungarian truck driver told the police that he saw someone near the truck about half an hour later, said Konrad Kogler, director of public safety and security at the Austrian Interior Ministry. The vehicle was parked on the side of a highway linking Vienna to Budapest, Mr. Kogler said.

That was not unusual in the area, where 3,000 trucks a day cross from Hungary into Austria and head west, he said. “Now, of course, we see it with different eyes,” he added.

The Austrian police, who have sent reinforcements to Nickelsdorf, near the border with Hungary, detained five people suspected of being smugglers and discovered about 200 migrants, Mr. Kogler said.

By Monday morning, traffic across the border, which is normally open under the European Union arrangements allowing passport-free travel, was backed up for miles.

To reinforce the point about the need for such measures to save lives, the Austrian authorities emphasized at least two more cases this month in which disaster had been narrowly avoided.

One episode, which became public over the weekend, involved a truck with 26 migrants, including three badly dehydrated children, found after the police chased a suspicious truck in northern Austria. The children were treated at a hospital and then fled again with their parents, officials said.

Mr. Kogler also cited a case of 86 people found in a truck west of Vienna in early August. The group included 16 children and one pregnant woman, he said, and had been crammed into a truck for 12 hours. “It was only luck that none of these people died,” he said.

He also cited estimates that more than 34,000 people had been smuggled into Austria so far this year, compared with an estimated 9,800 in all of 2014.

The Austrian police have apprehended 628 people suspected of being smugglers this year, compared with 277 in all of last year, he said.

Acknowledging that the new controls would clog movement along a busy artery, Mr. Kogler invited reporters to weigh the cost of human lives against “a few extra minutes in traffic.”