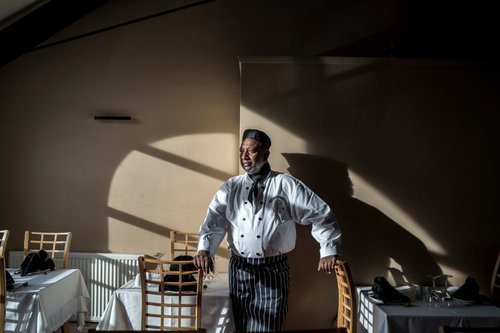 Curries Rotting in the Kitchens

Britons Perturbed by a Troubling Shortage of Curry Chefs

… But the curry industry has found itself in a pickle: There are not enough curry chefs in Britain.

The Conservative government’s restrictions on immigration are causing an acute staff shortage, said Shahanoor Khan, the secretary general of the British Bangladeshi Caterer Association. Already, he said in an interview, a third of the nation’s 12,500 curry houses are facing closing because they cannot find chefs.

The first generation of curry chefs who opened restaurants in the 1960s were mostly from East Pakistan, what is now Bangladesh, and are now retiring, but they cannot find cooks to replace them, Mr. Khan said. Younger, better-educated and more assimilated British Asians are reluctant to take on the family business because of the grueling hours and low pay.

… “Because of immigration, you have tikka masala,” said Paul Scully, a Conservative lawmaker and chairman of the All-Party Parliamentary Group of the Curry Catering Industry. Curry proves that immigration is no threat to Britain’s “cohesive society,” he said, criticizing Theresa May, the home secretary, who told the Conservative Party conference last month that migrants were endangering national cohesion.

Mohammad Azad, the executive chef at Cafe Saffron in Shrewsbury, said he had tried to hire Europeans. But there were “so many barriers in the kitchen, starting with the language,” he said at a curry chef awards ceremony held in London. …

“When it gets busy in the kitchen and you start shouting in Bengali, it’s difficult for a Romanian to understand,” Mr. Azad said, raising his voice above the din.

Staff shortages are common among all types of restaurants, but they are particularly worrisome for those specializing in curry….

Politicians and entrepreneurs like Mr. Scully and Mr. Bilimoria are urging the government to relax immigration rules. Britain puts a cap on skilled migrants arriving from outside the European Union and requires chefs seeking entry to be paid at least £29,570 a year, which is £5,000 more than the average salary in the industry. …

Mr. Bilimoria agreed. “Should we expect our curry to be cooked in Delhi and flown over to us?” he asked. “No,” he said. “We need chefs right here.”