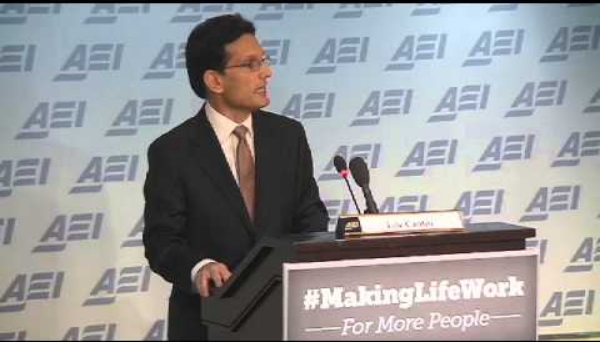 Eric Cantor’s speech is, as predicted, not good. Here’s a curious error, presumably by a young staffer, or spell check:

“Like so many of their generation living in Eastern Europe at the turn of the last century, my grandparents fled the vicious anti-Semitic programs of the czars of Russia to come to America.”[Eric Cantor’s AEI speech, as prepared.]

The word is pogroms. I'd have to look at the speech to see if Cantor actually thinks his ancestors were fleeing "programs." Pogroms were anti-Semitic riots in Russia before the Revolution. They’re mentioned in Israel Zangwill’s 1908 play The Melting Pot, and I mentioned them in an article years ago:

The Melting Pot shows the way in which foreign governments rely on America's open arms:

The wicked Baron shares his program for the Jews of Russia:

"One-third will be baptized, one-third massacred, the other third emigrated here."

The wicked Baron: "To stop all alien–? But that is barbarous!"

So foreign despotisms can solve their internal problems by forced emigration.[Immigration Myths (contd.): Zangwill and The Melting Pot, April 25, 2001]

The other point I mentioned is that in the play, David Quixano, pogrom orphan is meeting Baron Revendal, pogrom inciter—and they're both in America. There's no guarantee that any group of people fleeing to America are all the good guys. However, the main thing you need to know about these incidents is that they happened 110 years ago.

Update: Video below, he does pronounce it correctly: