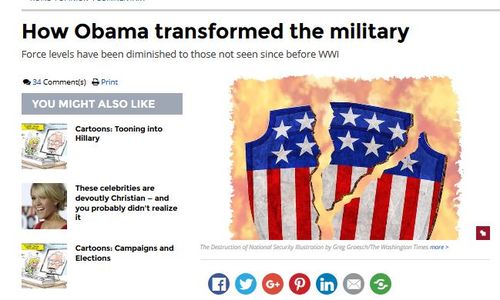 Allan Wall reported on the destruction of our military under Obama according to Admiral James Lyons (Ret). But the situation is even more dangerous than reported and about to get worse. And bad as he has been, it didn't start with Obama.

It is tempting to ascribe victory in WWII solely to the bravery of our soldiers and the brilliance of generals  such as Patton, but it in no way belittles them to say that their biggest asset was America's ability to outproduce the rest of the world. For example, Americans built a staggering 296,000 airplanes during that war and thousands of ships.

Fast forward to the present day: anyone paying attention knows that is almost impossible to find consumer products made in the U.S. anymore—from electronics, to cookware, to tools, screws, and even lightbulbs—almost everything is imported. Imagine a conflict with China—would we revert to candles for light and wooden pegs for screws? Several decades ago, an experienced tool and die maker told me that so much tool and die work has gone to China that in a war we would not have the skilled personnel to gear up for war production.

Now we have this:

“Washington legislators have re-awakened to concerns over the Defense Department's inability to plan for and deal with what is now the final stage in the shift of American microelectronics production offshore. Congress wants the Pentagon to figure out how it is going to deal with issues associated with purchasing "trusted" electronics for military weapons and national security surveillance systems from foreign and foreign-owned producers.” [DOD, NSA Enter A New World Order: U.S. Is Now Dependent On Foreign Companies For Its Most Sensitive Electronics,  By by Paola Masman, Coalition For A Prosperous America, June 2, 2016

Bad as it is to have lost the ability to produce what our military needs—like “trusted electronics”, we are also losing the ability to trust servicemen. Robert Johnson in Business Insider reports that there has been a 40% increase in gang members in the U.S. since 2009 and that our military is now infested with members of 53 different gangs. [The FBI Announces Gangs Have Infiltrated Every Branch Of The Military - Business Insider, October 22, 2011]

But it may be about to get worse. FAIR reports its opposition to:

“allow illegal aliens to enlist in the military in exchange for a green card and an expedited path to citizenship.”

Clearly recruiting illegal aliens into our military increases the chance of not only recruiting dangerous criminals, but also people with no loyalty to our country, and even those with a desire to harm us.

The destruction of our military is not an isolated event—it is a part of the descent of the entire country into the Third World. From the world's leading manufacturing nation we are devolving into a banana republic dependent on other countries for our manufactured goods—and with it we lose the ability to lead the world in technology. And the people who created the freest, most prosperous, and most powerful nation which ever existed are being diluted with immigrants from failed Third World countries.

Hopefully Trump will keep his promise to not only “make American great again” but also do the same for our military. We need to not only bring jobs back, but regain the ability to manufacture what we need to live—and fight. We need to lead the world in technology—and we need to do it with Americans—not imported workers who steal secrets for money and to strengthen their home countries. And we need patriots with fighting spirit leading our military—not politically correct politicians masquerading as military men who think “diversity” and “social justice” are more important than ability to win.