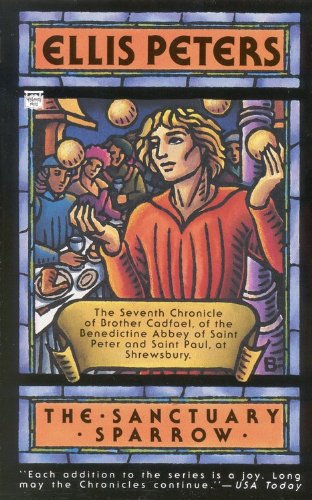 Now that Elvira Arellano is back in Mexico and reunified with her son, the question is moot, but she spent a year in the Adalberto United Methodist Church, with the ICE tacitly respecting her right to sanctuary, and they only arrested her when she left.Sanctuary is a medieval concept, with no place in American law, which is governed by the First Amendment, and can't give special privileges for a fugitive who happens to have chosen a church to hide in.

Back in medieval times there was such a right, but it was strictly limited. This is a scene from The Sanctuary Sparrow, a novel by Ellis Peters, in which a young man accused of attempted robbery is forced to seek sanctuary in a church, in the year 1140:

‘I well understand,’ said the abbot, ‘that on such a charge you must enquire, and may justice be done. But I think you also know well the sacredness of sanctuary. It is not shelter against sin, it is the provision of a time of calm, when the guilty may examine his soul, and the innocent confide in his salvation. But it may not be violated. It has a period, but until that time is spent it is holy. For forty days the man you seek on this charge is ours—no, he belongs to God!—and he may not be haled forth, nor persuaded forth, nor any way removed against his will from these premises. He is ours to feed, to care for and to shelter, for those forty days.’

‘That I grant,’ said the sergeant. ‘But there are conditions. He came of his own will within, he may enjoy only the allowance of food those within here enjoy.’ Less than he did, by his lusty bulk, but surely more than Liliwin had ever enjoyed as his regular provision. ‘And when the respite is over, he may not again be supplied with food, but must come forth and submit himself to trial.’

He was as iron-sure of his case here as was Radulfus in the days of grace, he voiced his mandate coldly. There would be no extension of the time allowed, after that they would make sure he starved until he came forth. It was fair. Forty days is consideration enough.

This is fictional, but Ellis Peters had a pretty good grasp of medieval law. Here's the Catholic Encyclopedia's article on sanctuary

A fugitive convicted of felony and taking the benefit of sanctuary was afforded protection from thirty to forty days, after which, subject to certain severe conditions, he had to "abjure the realm", that is leave the kingdom within a specified time and take an oath not to return without the king's leave.

That's a much different view of sanctuary than Elvira's—after forty days you're obliged to leave the country and not come back without permission. I'd settle for that.