In its current (Sept. 28) issue, the thinking person’s newsmagazine reviews Exodus: How Migration is Changing Our World, a new book by Paul Collier, who is a professor of economics at Oxford University.  The reviewer—this being The Economist, there is no byline—plainly does not frequent VDARE.com, nor any other website where the fundamentals of immigration economics and sociology have been chewed over for the past several years from a skeptical point of view.

The review begins with a questionable assertion:

Most polemics about migration argue either that it is good or bad.

Do they?  I must have read several hundred of those polemics, and have even written a few.  Hardly any argue that migration is good or bad per se.  Certainly I have never argued that.  It’s a question of numbers.

They address the wrong question, says Mr Collier. The right one is: how much more migration would be beneficial, and to whom?

So apparently the right-thinking person ponders thus: “Plainly there is not enough migration going on.  There should be more.  But how much more would be beneficial, and to whom?”

That anyone should think there is quite enough migration going on, perhaps even—gasp!—too much, is beyond our reviewer’s imagining.

Prof. Collier says that migration makes migrants better off because they are “escaping from countries with dysfunctional social models.”  No kidding: but our reviewer calls this “a crucial insight.”

What of the countries that receive immigrants? Mr Collier argues that they have benefited from past immigration, but will probably suffer if it continues unchecked . . . For most citizens of rich countries, immigration has meant slightly higher wages, as fresh brains with new ideas make local firms more productive. It may have dragged down wages for the least-skilled, but only by a tiny amount.

Lies, as we have been documenting for over a decade.

Excuse me?  Congolese music?  If I want it (don’t ask), why can’t I just download it?  What does immigration have to do with it?

But a large unabsorbed diaspora may cling to the cultural norms that made its country of origin dysfunctional, and spread them to the host country.

Furthermore, when a society becomes too heterogeneous, its people may be unwilling to pay for a generous welfare state, he says. Support for redistribution dwindles if taxpayers think the beneficiaries will be people unlike themselves.

Too much reality!  Stop!

After all, the guy’s an Oxford professor.  Better show some deference.

Nonetheless, he is far too gloomy.

How does our reviewer know that percentage?  Full 2011 Census figures have not yet been released.  We do have this for England and Wales: “The data highlights increased ethnic diversity in England and Wales since the 2001 census, with the proportion of white British people having dropped from 87.5% to 80.5% of the population.”

. . . and has seen substantial immigration only relatively recently.

His worries are mostly about the harm that immigration might do, rather than any it has already done. Indeed, the evidence he marshals suggests that so far it has been hugely beneficial.

One cannot help noticing that the most diverse part of the country—London, which is less than 50% white British—is also by far the richest.

So immigration benefits immigrants; London is packed with immigrants; they’re doing well.  No contradiction there.  But what about the natives?

It is also rather livelier than the lily-white counties that surround it. 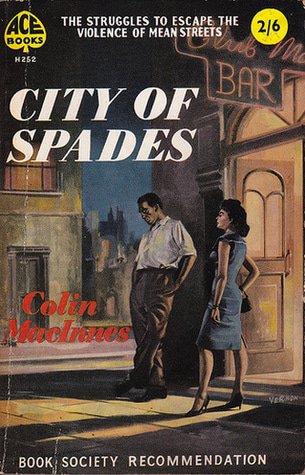 And how long have we been hearing this stuff about immigrants livening things up?  At least since 1957, when Colin MacInnes published City of Spades.  The ticket inspector in the London subway confronts Nigerian Johnny Fortune, who has just run up the down escalator.

“You boys are all the same,” he said.
“What does that mean, Mister?”
“Mad as March hares, if you ask me.”
He looked so sad when he said it, that how could I take offence?  “Maybe you right,” I told him. “We like living out our lives.”
“And we like peace and quiet.”

There’s a lot to be said for peace and quiet.  Though there is of course also a lot to be said for the Nigerian contribution to Britain this past 56 years.  The wealth-generating companies!  The technical innovations!  Scientific breakthroughs!  Classic TV shows!  Art! Literature! Drama!

But back to The Economist’s review of Prof. Collier’s book.

Every past wave of newcomers [into the U.S.A.] has assimilated; why should the next one be different?

Because nothing grows to the sky?

The recent history of Canada, Australia and New Zealand also suggests that large-scale immigration is compatible with prosperity and social cohesion.

It is also compatible with jihadism, black mob violence, and an imported permanent underclass.

After this frowning parade of immigrationist clichés, we learn that Prof. Collier is not only not a bigot, he is not even much of an immigration restrictionist.

He would welcome quite a lot of skilled migrants and students (a good idea) . . .

A good idea for Infosys and the ed-biz boosters, definitely.

As for illegal immigrants, he would offer them the chance to register as guest workers who pay taxes but receive no social benefits.

So no schooling for their kids, no subsidized health care?  That’ll sit well with the courts.

The tone of “Exodus” is problematic.

The tone!  So perhaps Prof. Collier is a wee bit bigoted, after all.  What other kind of person would get the tone wrong?

Mr Collier finds endless objections to a policy—more or less unlimited immigration—that no country has adopted.

How much more or less is “more or less”?  Twenty-five million from a single country is a lot.  And if no country has adopted unlimited immigration as policy, it’s not for want of urging from at least one country’s leading business journal.

He exaggerates the possible risks of mobility and underplays its proven benefits.

Whereas nobody, nobody—for sure not The Economist—has ever been known to exaggerate the benefits and underplay the risks.