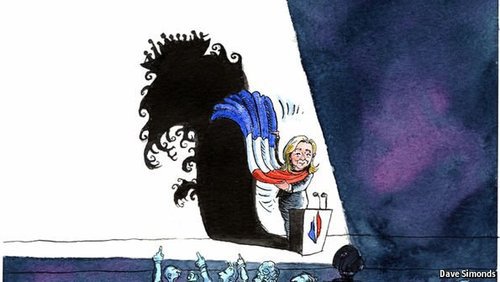 The problem with print deadlines is the time lag between T1 and T2, where My current issue of The Economist arrived at lunchtime today, so T2 is Monday afternoon.  T1, the cutoff point for new copy, seems to have been late on Thursday.  Uh-oh.

. . . Europe’s greatest refugee influx in modern history has strengthened right-wing anti-immigration parties from Poland to Switzerland. But the biggest European country in which such a party is close to securing a chunk of electoral power is France. Polls now make Ms Le Pen the favourite to win the region of Nord-Pas-de-Calais-Picardie at two-round elections on December 6th and 13th. Home to nearly 6m people, it covers not only Picardy, the city of Lille, and the mining basin to its south, but also the refugee camp at the port of Calais.

For the National Front (FN), conquering the north of France would mark its biggest victory yet. The party or its allies currently boast two members of parliament, and run 12 town halls. But the movement, founded in 1972 by Jean-Marie Le Pen, Ms Le Pen’s father, has never secured a region. Polls suggest that as many as three are now within its grasp: the north; the region around Provence in the south; and a third towards Alsace in the east. A win in even one would be a big step for a party bent not only on protest, but on power . . .

The refugee crisis has played straight to Ms Le Pen’s hand, even though the exodus from Syria and Iraq has headed overwhelmingly to Germany, not France . . .

Those foolish, fearful French!  They're not even getting any migrants.